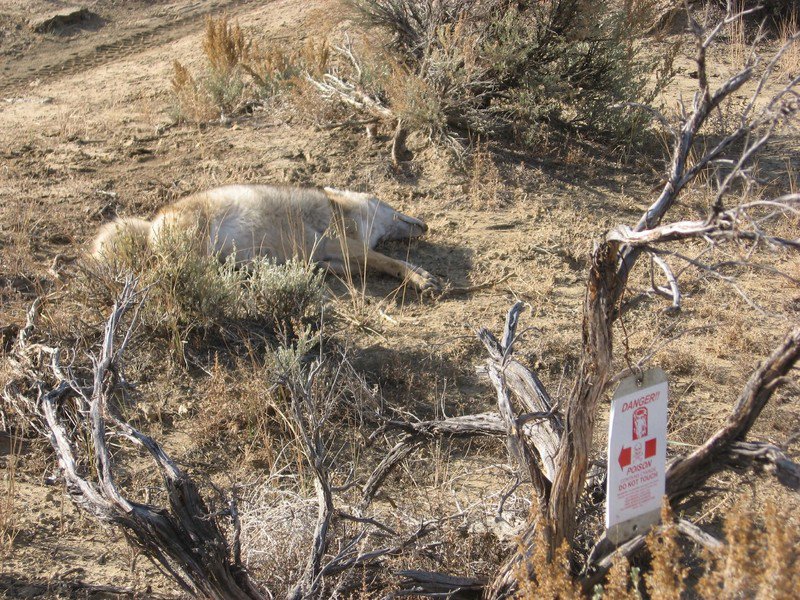 WASHINGTON— The Trump administration today announced it will reauthorize use of sodium cyanide in wildlife-killing devices called M-44s. These “cyanide bombs” received approval from the U.S. Environmental Protection Agency despite inhumanely and indiscriminately killing thousands of animals every year. They have also injured people.

“This appalling decision leaves cyanide traps lurking in the wild to threaten people, pets and imperiled animals,” said Collette Adkins, carnivore conservation director at the Center for Biological Diversity. “The EPA imposed a few minor restrictions, but these deadly devices have just wreaked too much havoc to remain in use. To truly protect humans and wildlife from these poisonous contraptions, we need a nationwide ban.”

The EPA allows use of the devices by Wildlife Services, the animal-killing program of the U.S. Department of Agriculture. The EPA also authorizes M-44 use by state agencies in South Dakota, Montana, Wyoming, New Mexico and Texas.

A federal court recently approved a ban on M-44 use by Wildlife Services across more than 10 million acres of public land in Wyoming. The Wyoming ban is as part of an agreement resulting from a lawsuit brought by the Center and other wildlife advocacy groups.

In August the EPA issued an interim decision renewing sodium cyanide registration. Then a week later, it withdrew that interim decision for more discussions with Wildlife Services. Today’s announcement reauthorizes use of the devices.

More than 99.9 percent of people commenting on the proposal asked the EPA to ban M-44s, according to analysis from the Center for Biological Diversity and Western Environmental Law Center.

None of the restrictions will prevent killing of non target wildlife, however.

“While it is encouraging that the EPA is taking at least some minimal action to protect the public from deadly M-44s, updating a few use restrictions –– nearly impossible to enforce and commonly ignored –– fails to meaningfully address the problem,” said Kelly Nokes, Shared Earth wildlife attorney with the Western Environmental Law Center. “EPA is blatantly ignoring its fundamental duty to protect the public, our pets and native wildlife from the cruel, lethal impacts of cyanide bombs lurking on our public lands. We will continue to hold our federal government accountable to the law, and will continue our fight for a ban on M-44s once and for all.”

“Tightening up use restrictions is turning a blind eye to the reality of M-44s,” said Brooks Fahy, executive director of Predator Defense. “In my 25 years working with M-44 victims I’ve learned that Wildlife Services’ agents frequently do not follow the use restrictions. And warning signs will not prevent more dogs, wild animals and potentially children from being killed. They cannot read them. M-44s are a safety menace and must be banned.”

“USDA’s rampant, well-documented noncompliance with existing use restrictions has made clear that additional restrictions will not adequately protect the public, pets and wildlife from these deadly cyanide bombs,” said Carson Barylak, campaigns manager at the International Fund for Animal Welfare (IFAW).

According to Wildlife Services’own data, M-44s killed 6,579 animals, mostly coyotes and foxes, in 2018, down from 13,232 animals in 2017. Of these, more than 200 deaths were non target animals, including a bear, foxes, opossums, raccoons and skunks. These numbers are likely a significant undercount of the true death toll, as Wildlife Services is notorious for poor data collection and an entrenched “shoot, shovel, shut up” mentality.

M-44 devices spray deadly sodium cyanide into the mouths of unsuspecting coyotes, foxes and other carnivores lured by smelly bait. Anything or anyone that pulls on the baited device can be killed or severely injured by the deadly spray.

In response to a 2017 lawsuit brought by the Center and its allies, the U.S. Fish and Wildlife Service agreed to analyze impacts of M-44s on endangered wildlife by the end of 2021. Another 2017 lawsuit by the wildlife advocates prompted Wildlife Services in Colorado to temporarily halt the use of M-44s while it completes a new environmental analysis on its wildlife-killing program.

Last year the EPA denied a 2017 petition authored by the Center for Biological Diversity and Wild Earth Guardians that asked for a nationwide ban on M-44s.

M-44s temporarily blinded a child and killed three family dogs in two incidents in Idaho and Wyoming in 2017. A wolf was also accidentally killed by an M-44 set in Oregon that year. In response, Idaho instituted an ongoing moratorium on M-44 use on public lands, and Oregon this year passed legislation banning them in the state.

Lead Image Source : Dead wolf or coyote near POISON sign in New Mexico in 2016. Image available for media use. This image was gathered through a FOIA request by the Center for Biological Diversity and is public domain

This article was first published by The Center for Biological Diversity on 5 December 2019.

Cruel, stupid and evil on steroids

Barbaric!! Someone should put a cyanide bomb in Trump’s mouth.