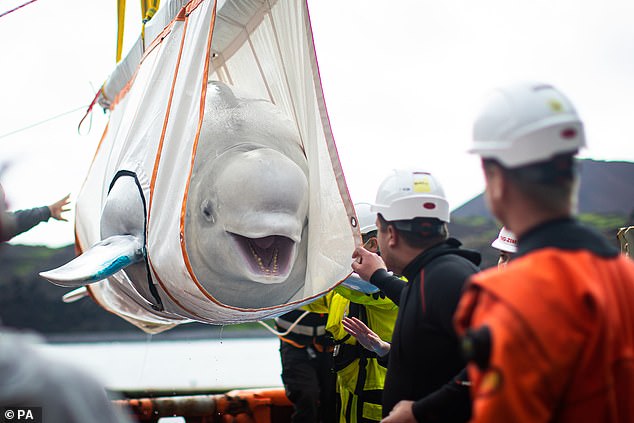 They are creatures who always seem to have a smile on their faces.

And now, two beluga whales are sure to be feeling much happier thanks to British charity the Sea Life Trust.

The whales, called Little Grey and Little White, have been freed from captivity in China to swim in the sea for the first time in nearly a decade.

In a painstakingly-planned, 6,000-mile journey the charity relocated the 12-year-old pair from a Chinese aquarium – where they performed as show animals – to the world’s first open water sanctuary.

They are now exploring a special area of the facility at Klettsvik Bay off the south coast of Iceland to acclimatise before their final release in to the wider sanctuary.

Andy Bool, head of the Sea Life Trust, said: ‘We’re absolutely delighted to be able to share the news that Little Grey and Little White are safely in their sea sanctuary care pools and are just one step away from being released into their open water home.

‘Following extensive planning and rehearsals, the first stage of their release back to the ocean was as smooth as we had hoped and planned for.’

It is the first time the belugas, both female, have been in the sea since they were taken from a Russian whale research centre in 2011, the charity said.

The cetaceans were later transferred to China, where they performed tricks for fish.

For their trip to Iceland, the pair were put in specially-designed slings with custom-made foam matting to cushion their bodies during the complex journey, which involved a lorry, a Boeing 747-400ERF cargo aircraft and a harbour tugboat.

The final stage of their release is due in the coming weeks. Merlin Entertainments, the UK firm that owns Sea Life centres, acquired Changfeng Ocean World aquarium in China in 2012, and had been searching for a new home for the belugas.

The company made a ‘substantial donation’ to the Sea Life Trust to fund the operation.

The Sea Life Trust describes Little Grey as ‘very playful’ but she also has a mischievous side – and likes to spit water at her care team.

Little White is ‘much more reserved but still likes to play and forms close bonds with her carers’.

This article was first published by The Daily Mail on 10 August 2020. Lead Image: Beluga whale Little Grey is one of two whales to be freed from captivity in China to swim in the sea for the first time in nearly a decade – PA Images.