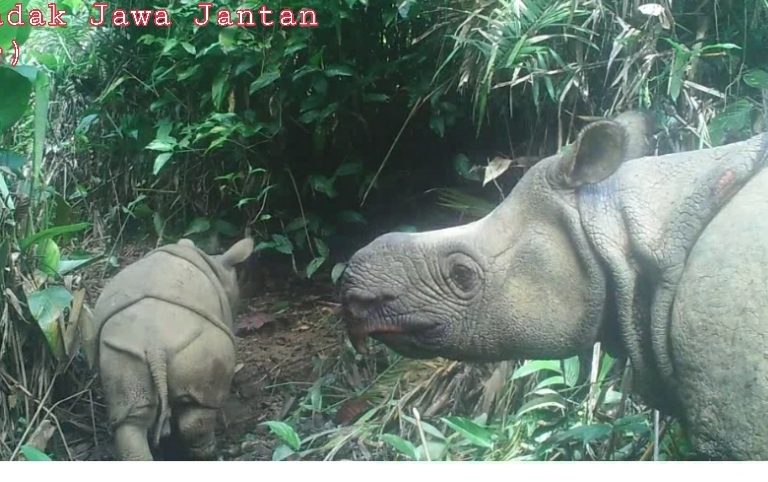 JAKARTA — Conservationists in Indonesia have reported the presence of two newborn Javan rhinoceros calves in the only place on Earth where the critically endangered species is still found, bringing its total population to 74.

The calves — a female and a male that conservation officials have named Helen and Luther — were spotted with their mothers in images taken by a network of nearly 100 camera traps installed in Ujung Kulon National Park, on the western tip of Indonesia’s Java Island. The images were captured between March and August, according to authorities. There has been at least one newborn Javan rhino (Rhinoceros sondaicus) calf recorded every year since 2012, according to the International Rhino Foundation (IRF).

“The births of these Javan rhinos in Ujung Kulon National Park have strongly indicated that its population continues to naturally grow well, that it gives a big hope for the survival of this rare species,” Wiratno, Indonesian environment ministry’s director-general of conservation, said in a statement released Sep. 20.

Poaching and habitat loss have driven the species, which once numbered in the thousands across Southeast Asia, to near extinction. Now, an estimated 74 Javan rhinos — 40 males and 34 females — live in the protected park.

While the population appears to be growing at a stable rate, it’s the only one left in the world. This has raised concerns among wildlife experts that a disease outbreak or natural disaster could devastate this last remaining population. Ujung Kulon sits within view of the Anak Krakatau volcano in the Sunda Strait, and in December 2018, an eruption there triggered a tsunami that hit the national park. The rhinos had been sheltering inland when it struck and went unscathed, though the waves killed two park officials and more than 400 people elsewhere along the coast.

“As the Javan rhino population increases, expanding their habitat will be a major concern,” Nina Fascione, executive director of the IRF, wrote in a recently published statement addressing the current State of the Rhino.

These factors have prompted the government and conservation groups to look for a suitable second habitat in which to establish a new rhino population. Despite the urgency of the situation, the task of finding a new habitat appears to have been put on hold; instead, the Indonesian government has opted to expand the usable habitat inside Ujung Kulon.

While poaching in Ujung Kulon has not been reported in more than 20 years, Fascione highlighted a new threat to the habitat: illegal fishing and lobster trapping in the protected waters of the park. The Indonesian government in May allowed the resumption of catching lobster larvae from the wild for export, effectively opening up the shores of Ujung Kulon to fishers.

“Poachers may ‘hitch a ride’ to the beaches of the park which are frequented by the rhinos,” Fascione wrote.

She added that a marine patrol had been launched in January 2020 and had since apprehended 45 boats and 218 people illegally encroaching in the park just in the first six months of operations.

A decade ago, the Javan rhino population was estimated at no more than 50 individuals. Efforts by the Indonesian government and organizations from around the world to beef up security across the area from encroachment and poaching have been in force for many years, and experts credit these measures for the stable increase in rhino numbers.

“From one birth of the Javan rhino to another has strengthened our optimism and passion [for rhino conservation],” Wiratno said.

This article by Basten Gokkon was first published on Mongabay.com on 21 September 2020. Lead Image: The male Javan rhino calf named Luther with its mother. Image courtesy of the Indonesian Ministry of Environment and Forestry.