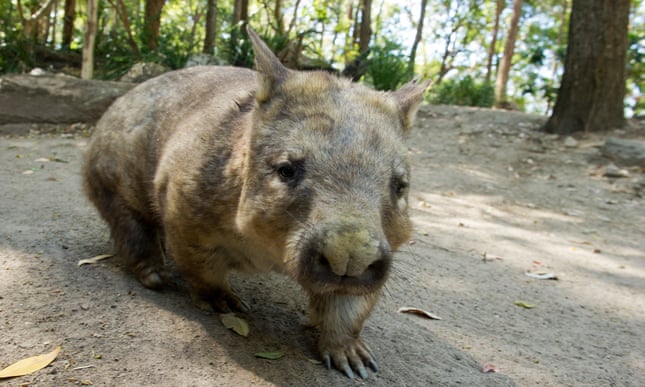 Two of Australia’s three native wombat species are under threat from a disease which can leave the animal blind and deaf, and eventually kill them.

A project launched by the University of Western Sydney is calling on the wider community to help track wombat health, and hopefully stop the spread of the sarcoptic mange disease before it wipes out the animals.

Australia is home to three types of the beloved and delightfully odd wombat – northern hairy-nosed, southern hairy-nosed and the bare-nosed, formerly known as the common wombat.

Wombats can grow to a metre in length and are surprisingly nimble, reaching speeds of 40km/h in short bursts. They live to about 14 years but have lasted longer in captivity – it was recently reported the world’s oldest bare-nosed wombat in captivity, 30-year-old Patrick, had joined Tinder. The animal also has the unlikely distinction of pooing cube-shaped faeces.

It is the southern hairy-nosed and bare-nosed species which are under threat from the disease. Some estimates say sarcoptic mange could kill 80-90% of the southern hairy nosed population.The tale of a wombat: a journey from Australia to Newcastle upon TyneRead more

Sarcoptic mange is a parasitic infestation caused by mites which leads to “disgusting”, debilitating and eventually fatal secondary infections as the creatures burrow into the skin and cause irritations. Researchers have warned there is potential for population crashes and local extinctions.

“The wombats spend a lot of time scratching because the mites are digging into their skin and they can get bacterial infections and the fluids start to ooze out,” Julie Old, the chief investigator on the project, told Guardian Australia.

“Their skin gets thickened and they can become deaf and blind as well. They spend more time out during the day because they need to get more nutrition than they would normally need. So people often see hairless, very very sick, emaciated wombats out during the day.”

Scott Carver, of the University of Tasmania, recently took a team of researchers to spotlight and tag wombats, and filmed the expedition.

The goal was to recapture previously tagged wombats and monitor changes in the effects of the disease. The team captured, sedated and took the wombat in for testing. In the dawn light it is then released back into the wild.

Researchers are now also calling on the wider Australian population to assist, with an app, released on Android and soon to be released on Apple, which crowdsources data on wombat populations.

The wombat survey and analysis tool (WomSAT) allows users to log wombat sightings on a map and include information about the habitat and condition of the animal, giving conservationists vital information.

“We know there are mangy wombats in Tasmania, Victoria, New South Wales and South Australia but we’re not really sure exactly where the pockets might be healthy wombats or wombats with mange,” said Old.

With the information gathered conservationists and researchers can begin work on an Australia-wide response strategy.

“This is a very early stage, just to see where are the problems, are there other threats to wombat as well? Roadkill is a big one. Are there particular hotspots? It’s all threats to wombats and it’s the very first stage of a much bigger project.”Advertisement

Mange is one of two main threats to wombats, Evelyn Weston, a senior keeper with the Australian fauna precinct at Sydney’s Taronga Zoo, told Guardian Australia. The second is humans and their cars.

“The mange is quite prolific and results in quite awful things for the wombat,” Weston said.

“It’s tragic see them wandering around in the middle of the day, when they can’t even tell if it’s day,” she said.

Weston praised the goal of the project.

“It would be good to know more about where [mange] is worse, where it’s not so bad and where it’s non-existent.”

For the last year Weston hand-reared Chloe, a wombat orphaned when her mother was hit by a car.

“They’re pretty smart, life is all about digging holes and eating grass and staying away from dogs, but the little one we have here recognises people,” she said.

“She’s just an amazing little creature. so affectionate, even now this 10kg hairy lump is very affectionate with everybody.”