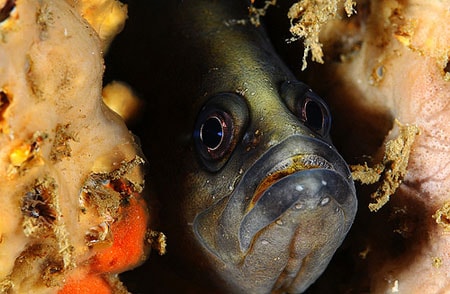 Today marks the second anniversary of the Gulf oil spill. Oil has long stopped flowing from the leaking rig, but that doesn’t mean the disaster is over. Local fishermen have been making some off-putting discoveries: nets full of eyeless shrimp, clusters of clawless crabs, and more.

Oil and the dispersants used to break it up are making it into the food chain, which could account for some of these deformities. Al Jazeera has been interviewing people involved in the Gulf seafood business and published the disturbing results of those interviews today.

One fisher told them she is finding crabs “with holes in their shells, shells with all the points burned off so all the spikes on their shells and claws are gone, misshapen shells, and crabs that are dying from within …”

Another said that shrimp numbers have dropped dramatically, and that they see shrimp with tumors on their heads every day. Louisiana fishers have pulled up entire nets of eyeless shrimp. Some crabs have soft or misshapen shells. Fish and shrimp have tumors and lesions.

Such deformities happened even before the spill, but the high number of diseased and deformed animals being found after the spill shock both fishers and scientists. In some areas after the spill, a startling 50% of fish have these lesions.

One scientist said he thought the issues could be traced to chronic exposure to PAHs [a compound found in crude oil] released in the process of weathering oil.

And it’s not just fish that have been affected by oil. Gulf dolphins have been found sick and dead, and the numbers of dolphin carcasses found is likely only a fraction of the total amount of dolphins that were killed by the oil.

The sad state of sea life in the Gulf proves that even long after oil is gone from sight, it is still dangerous. It will take decades for the Gulf to recover from this accident. In the meantime, we here at Oceana are working hard to push for safer energy sources and keep oil drills out of our waters.

This article was written and published by TRAFFIC.