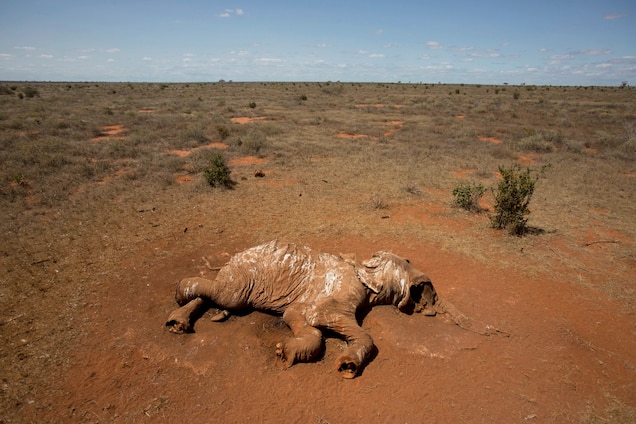 With the slaughter of elephants and rhinos in Africa at record levels, lawmakers in the U.S. are stepping up efforts to save some of the world’s most iconic species.

An Obama administration task force is expected to make recommendations on how the federal government do more to fight wildlife trafficking, a trade that largely revolves around elephant tusks and rhino horns, by the end of the month.

On Thursday, the Senate Foreign Relations Committee is set to discuss legislation to strengthen law enforcement efforts against wildlife trafficking by bolstering resources, improving information sharing among agencies, and stiffening penalties for traffickers. A similar bill is working its way through the House of Representatives.

Last month, more than one ton of confiscated elephant ivory was crushed in Times Square, which followed similar events in Asia, Europe, and Africa and came on the heels of new ivory sale bans in New York and New Jersey.

And on Wednesday, a group of high-profile conservationists, lawmakers, and officials convened in Washington for a wildlife trafficking summit at the Center for Strategic and International Studies.

But for now, the slaughter continues. More than 100 elephants are being killed across Africa every day. Since 1989, the population of African elephants has fallen by half, to about 500,000. Similar declines have been seen with rhinos.

The killings are fueled by a demand for tusks and horns in Asia that has made ivory and rhino horn more valuable than gold or cocaine. Illicit wildlife trafficking generates $8 to $10 billion annually, Senator Jeff Flake (R-AZ), the chair of the subcommittee on African Affairs, said at the Wednesday summit. It also threatens international security through links to drug trafficking, violence, corruption, and terrorism.

“The big question is where do we focus our time, on reducing demand in Asia, finance efforts, or community-based efforts?” asked Flake. “My feeling is that it will be a combination of those.”
Ivory in the U.S.

Demand for wildlife products has been driven largely by a rising middle class in China and Southeast Asia, whose ranks increasingly desire ivory, horns, and other materials for trinkets and medicinal products that Western scientists say don’t really work.

Although the Chinese market is responsible for an estimated 70 percent of global poaching, “we’ve also got an ivory problem here in the U.S.,” says Hemley, noting that the U.S. is considered the world’s second biggest market for wildlife products.

Cleaning up the domestic ivory market will go a long way to stopping the slaughter and will send a vital message to Asian countries that the U.S. is serious about the problem, she says.

President Obama is expected to announce a federal rule that will prohibit interstate trading of ivory by the end of July, building on efforts he announced last year that increased restrictions on the trade. Import of any new ivory has been banned since 1989 by international treaty, but sales of existing ivory have continued and have allowed smugglers to dupe officials, says Hemley.

“We will virtually eliminate all domestic trade of ivory in the U.S., so we can lead by example,” Dan Ashe, the director of the U.S. Fish and Wildlife Service, said at the panel at Wednesday’s summit.

This year, New York and New Jersey passed state laws that outlawed selling of ivory, and similar bills are currently being debated in California, Hawaii, the District of Columbia, and a handful of other states.

The State Department and USAID are also asking for $28 million to address the problem through helping bolster Africa’s protected areas, training foreign wildlife officials, and other activities.

Such support is essential, says National Geographic investigative reporter Bryan Christy, who has been leading coverage of the issue and spoke at Wednesday’s summit. “To see the handful of bullets that the rangers are given to go out and protect wildlife is humbling,” he said at the event. “These guys are dying in the line of duty.”

Watch: Learn more about the battle for elephants.

China announced its intentions to phase out its legal ivory market in May.

But the country is thought to have tons of ivory stockpiled, so it’s conceivable it could supply its ivory carving market for years without importing any more tusks. That could keep demand going for a long time, says Adam M. Roberts, CEO of conservation group Born Free USA.

The ultimate solution to the slaughter of African animals lies in reducing demand for their parts, said Flake, who likened it to global deman for illegal drugs. More public service announcements and media and educational campaigns decrying the sale of ivory and other animal products are happening in Asia, some with celebrity spokespeople.

Such efforts are critical but they may take a long time, says Roberts. That’s why it’s also important to increase security at airports and other smuggling centers to “choke off poachers’ profits, so people start looking elsewhere for another line of work.”

Ashe recently traveled to Africa to reinforce that point. Pending legislation would go further by stiffening the penalties for convicted wildlife traffickers, which conservationists say are currently too light. It would also improve information sharing between various agencies and step up enforcement resources.

“We need to go after the people who are reaping the financial rewards of this poaching epidemic,” Ashe added, in addition to the low-level poachers who actually pull the triggers. Those people include corrupt officials who look the other way, he said, and leaders of international crime syndicates.

This article was first published by National Geographic on 15 Jul 2015. Lead Image: African elephants like this one in Tsavo East game park are getting poached at unprecedented rates, but new efforts are gearing up to address the problem. Photograph by Karel Prinsloo, eyevine/Redux.