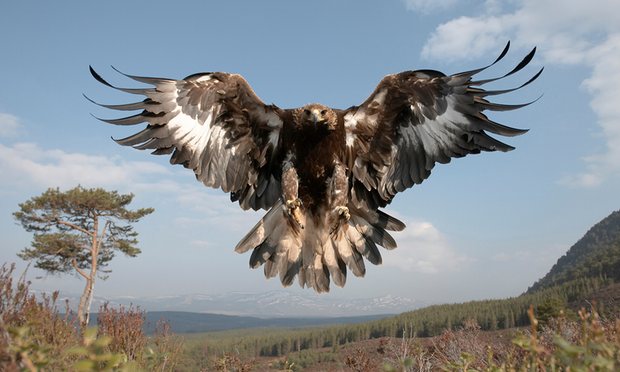 Britain’s golden eagle population has soared to new heights, according to a new survey released on Wednesday.

There are now more than 500 breeding pairs in the UK, up 15% and passing the threshold at which bird’s long-term future is thought viable.

The huge raptors, which have a wingspan of 2m, have benefitted from fewer illegal killings and less grazing on hills by sheep and deer which leads to reduced prey, such as hares and grouse.

However, the birds still only occupy about two-thirds of their traditional territories, with particularly low numbers in the east of Scotland. In that region many of the empty ranges are on land intensively managed for driven grouse shooting and several illegal killings have occurred in recent years.

The national survey, funded by the RSPB and Scottish Natural Heritage (SNH), found 508 breeding pairs, all in Scotland. England’s last golden eagle went missing this year and is feared dead. The previous survey, in 2003, found 442 breeding pairs, up from 422 in 1992.

Golden eagles were once common across Britain but had disappeared from England and Wales and fallen to very low numbers in Scotland by the mid 19th century due to widespread persecution.

The surviving population in Scotland then suffered a sharp decline in breeding success in the 1960s due to organochlorine pesticides which caused mass infertility. Golden eagles are usually long-lived, with many adults living for up to 25 years.

“The sight of a golden eagle soaring in the sky above is an awe-inspiring part of our natural heritage and this increase in numbers of golden eagle pairs is great news,” said Duncan Orr-Ewing, at RSPB Scotland.

Golden eagles prey on grouse and have been targeted as a result, but Orr-Ewing said attitudes are shifting. “The biggest driver [for the rising population] is a decline in illegal persecution,” he said. “Hopefully we are seeing a more enlightened attitude to birds of prey.”

He said there had been fewer killings due to the satellite tagging of golden eagles, which helps identify killings, and the huge negative publicity that now follows the crimes.

But persecution remains a problem, as some birds simply disappear after their tags are apparently deliberately destroyed – at least eight in the past five years.

“There is no other explanation – this is military grade technology,” Orr-Ewing said. Four satellite-tagged golden eagles have also been found illegally killed in the central and eastern Highlands since 2009.

Golden eagle numbers are particularly low in the east of Scotland, with just 30% of known territories occupied – 34 out of 91. “There is an abundant food supply and they should be doing really well there,” Orr-Ewing said.

Lack of prey has hampered the bird’s recovery in the western highlands, where overgrazing has made the landscape unsuitable for hares and grouse. But there has been a big decline in the number of sheep on the hills and a focus on reducing deer numbers from the current 750,000 across Scotland, as well as the planting of native woodland that increases prey numbers.

The new figures represent a significant landmark for the golden eagle, as a 2008 SNH report concluded that more than 500 breeding pairs are needed for the raptor to have “favourable conservation status” in the UK, meaning it has a population that can survive in the long term.

Tim Baynes, director of the Scottish Moorland Group, which represents grouse moor owners and gamekeepers, said: “Our members are passionate about the golden eagles on their land. The south central Highlands, which includes significant areas of driven grouse moor, has shown by far the greatest increase in range occupancy – [now] 70% – since 2003”.

The UK parliament debated a petition to ban driven grouse shooting in October. Environment minister Thérèse Coffey said the government had “no intention” of introducing a ban, but “every intention” of persecuting those who illegally kill birds of prey.

This article was first published by The Guardian on 10 Nov 2016.