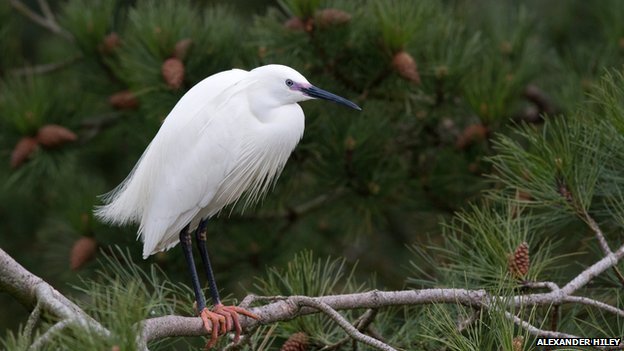 The UK’s nature reserves act as ‘ecological welcome mats’ to new species, according to scientists. Since the 1960s, there has been a natural influx of wetland bird species from continental Europe.

Species such as whooper swans, Cetti’s warblers and little egrets have used the nature reserves to colonise new areas of the UK, found the scientists. The findings are published in the Proceedings of the Royal Society B: Biological Sciences.

The effectiveness of the UK’s Protected Areas, from National Parks to nature reserves, was criticised in 2010 by a government review that concluded they were too fragmented and offered limited long term security.

“They fear that climate change might ‘push’ species out of static reserves,” said Jonathan Hiley, a PhD student at the University of York and co-author of the study. Protected Areas are often formed to protect individual species, so if these species move out the area’s strengths can become redundant.

To examine whether nature reserves can still offer benefits in these situations, Mr Hiley and colleagues conducted research into migrant species as part of a wider project run by the RSPB.

“We have shown… that for birds which are shifting range in response to climate change or other factors, it is crucial they have good quality habitat to move in to, and our reserves provide that habitat,” he said.

Twenty previously unrecorded species of wetland bird have arrived in Britain since the 1960s, six of which have established continuing breeding patterns. “Although birds colonising new areas isn’t a new phenomenon, the last half century has been notable for the number of new wetland bird visitors to the UK,” said Mr Hiley.

“Some of these species, such as Cetti’s warbler and little egret, were formerly limited to southern Europe, but appear to have moved north as a result of more suitable climatic conditions.” Looking at breeding records, Mr Hiley confirmed that all 20 migrant species first appeared in the UK within Protected Areas.

“It appears that UK´s Protected Areas provide excellent habitat for these colonisers; when they turn up they invariably breed in our nature reserves,” he said. The researchers also found that birds such as whooper swans and common cranes established breeding populations outside of Protected Areas after their initial breeding success in reserves.

“The species that we looked at here can be deemed ‘natural colonists’ in that they are arriving in the UK from the near continent of their own accord, as opposed to non-native invaders from further afield, such as Canada geese or ruddy ducks, which colonise as a result of man-made introductions,” Mr Hiley told BBC Nature.

He described how the new arrivals are largely welcomed by conservationists and research into how they use nature reserves is ongoing. “This gives some cause for optimism in the midst of concern that climate change and other factors will imperil many species,” added co-author Professor Chris Thomas.

“Protected areas are helping to give birds and other species a fighting chance of moving into new regions where they can breed successfully.”

This article was written by Ella Davies Reporter, BBC Nature