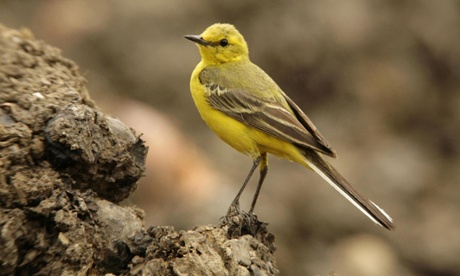 The three species of wagtail that breed in the UK are suffering long-term declines, a study has revealed. Yellow wagtails, grey wagtails and pied wagtails are all in decline, according to the annual breeding bird survey’s latest report, though conservationists say the reasons for the reductions are not clear.

Yellow wagtails, farmland birds which migrate to sub-Saharan Africa, have seen numbers reduce by more than two-fifths (43%) between 1995 and 2012.

Changes in agriculture are thought to be to blame for the yellow wagtail’s decline, but as it is a migrant, problems overseas cannot be ruled out, the British Trust for Ornithology (BTO) said.

Grey wagtails, a species which lives by rivers, has declined by almost a third (32%) since the survey started 20 years ago, while the familiar pied wagtail has seen declines of 11%.

Both birds have shown rapid declines along rivers and canals, according to the waterways breeding bird survey, which focuses on river habitats, and pied wagtails have seen steeper declines in the river-based survey than in the general breeding bird survey which covers all habitats.

This suggests there may be issues related to rivers which are affecting both species.

The “races” of pied and yellow wagtail which breed in the UK nest virtually nowhere else in the world, conservationists added.

Sarah Harris, survey organiser at the British Trust for Ornithology, said: “I find it fascinating that three seemingly similar birds, the yellow, grey and pied wagtail can lead such different lives and face such a variety of challenges.

“With the UK races of two of these species – pied and yellow wagtails – being largely confined to our islands, these population changes are of global conservation significance.”

The results of the survey by the BTO, government advisers the joint nature conservation committee and the RSPB, using counts made by volunteer bird watchers, also show declines for key farmland birds.

Grey partridge numbers were down by 56% between 1995 and 2012, and skylarks have declined by nearly a quarter (24%), with increasingly intensive agriculture playing a key role in their declines, the experts said.

And the latest update reveals that some breeding birds saw a significant year-on-year decline in 2013, as a result of the bad weather conditions in 2012.

Mark Eaton, RSPB principal conservation scientist, said: “This survey is most valuable for showing us trends stretching back nearly 20 years. However, it also provides a snapshot into changes between years, and this report reveals that 2012 was clearly a bad year for some of our breeding birds.

“A cold spring followed by the wettest summer on record have to be prime candidates for why many species showed a significant decline in 2013. Of the 36 species which showed a significant change in numbers between 2012 and 2013, 34 decreased. For some species, such as turtle dove, these recent falls compound long-term declines.”