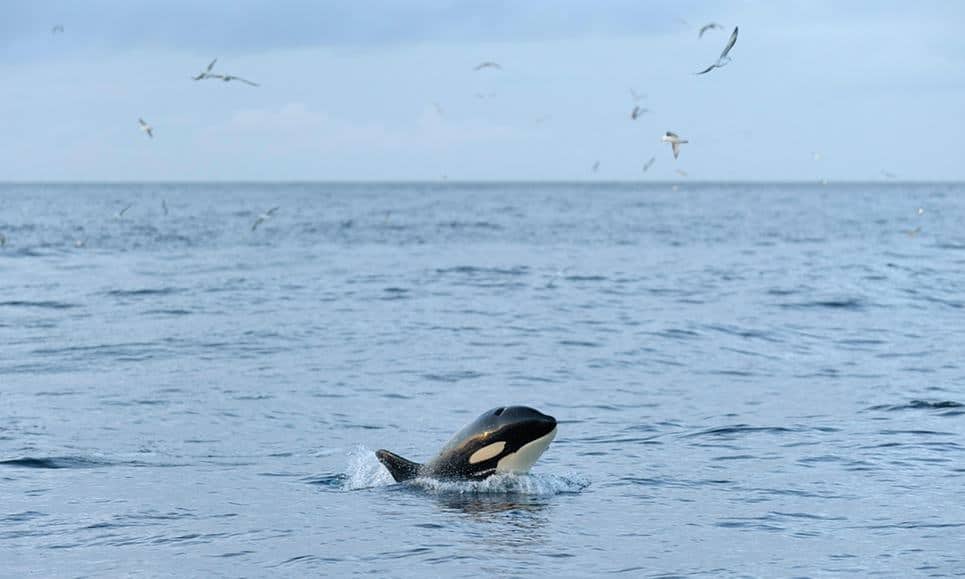 The UK’s last pod of killer whales is doomed to extinction, with new research revealing western European waters as a global hotspot for the lingering legacy of toxic PCB pollution.

The persistent chemicals, used in electrical equipment but banned in the 1980s, are still leaking into the oceans and were also found in extremely high levels in European dolphins, whose populations are in decline.

The new research analysed levels of PCBs, which are known to harm breeding success and immune systems, in the blubber of more than 1,000 dolphins and killer whales over the last 20 years. The levels found “greatly exceed concentrations at which severe toxic effects are known to occur,” the scientists found.

“The levels are really high, probably the highest in the world right now,” said Paul Jepson, at the Zoological Society of London (ZSL), who led the new study. “These are global PCB hotspots.”

Killer whales were present in the North Sea until the 1960s, when PCB pollution peaked, and in the Mediterranean until the 1980s. But the UK’s last resident pod off north-west Scotland, which was reduced to just eight members last week when a female named Lulu died, has not produced a calf in the 19 years it has been studied.

“This group will go extinct unfortunately,” said Jepson. When that will happen is uncertain as killer whales live for around 50 years – sometimes 90 years – and the ages of the pod are not well known. Migratory killer whales may continue to visit UK waters.

Jepson said there was “a very high extinction risk” for other killer whale pods in western Europe, such as the group of 36 that feeds on tuna in the straits of Gibraltar: “Without further measures, these chemicals will continue to suppress populations of orcas and other dolphin species for many decades to come.”

The research, published in the journal Scientific Reports, shows a link between PCB levels and falling numbers of killer whales and dolphins, but not a direct connection. Jepson said: “This is not definitive proof of cause and effect, but it is very consistent [with the evidence].”

PCB levels are a particularly acute problem for killer whales and dolphins because they are at the top of the food chain and long-living. The toxins are first eaten by filter feeders on the sea floor, like bivalve molluscs, then by larger creatures like crabs, and then fish – meaning the PCBs accumulate all the way up the food chain, with killer whales and dolphins getting the largest doses.

One striking finding for the killer whales, bottle-nosed and striped dolphins and harbour porpoises studied was that the PCB levels in the females were as high as the males. This is unusual, because PCBs are stored in fat and the female dolphins normally get rid of PCBs in the high-fat milk with which they feed their calves.

“A female can offload 90% or more of her body burden of PCBs to her calf through the milk during the long lactation period, just at the time the new calf is very vulnerable,” said Jepson.

The high levels of PCBs found in the females indicates they are not reproducing, he said: “It is a chemical marker of reproductive failure.” One population of bottle-nosed dolphins off Portugal, which has been studied for 40 years, has produced no offspring for over a decade. Direct evidence of foetal death and abortion is common in postmortems of harbour porpoises.

PCBs were banned in banned in the UK in 1981 and across the European Union in 1987 and levels in the seas then declined. But the PCBs found in the marine mammals stopped falling from about 2000, indicating that some PCBs are still steadily leaking into the environment.

Most of the 300,000 tonnes of PCBs produced in Europe is thought to still be on land and much has yet to be properly disposed of, said Jepson: “There is a lot more PCB to work its way through the system.”

Leakage from unlined landfill sites is one source of PCBs and chemicals that have already entered the sea and been buried in sediment is being released again by dredging of navigation channels.

“They are designed not to break down with heat or chemical attack,” said Jepson. “It is very hard to destroy them.” Safe burial or very high temperature incineration are the main ways to deal with PCBs.

“Our research underlines the critical need for global policymakers to act quickly and decisively to tackle the lingering toxic legacy of PCBs, before it’s too late for some of our most iconic and important marine predators,” said Robin Law, also at ZSL.

Nicola Hodgins, head of science and research at conservation charity Whale and Dolphin Conservation, said: “The magnitude of the situation for marine mammals [revealed by the research] is incredibly worrying. Many thought that just because PCB’s were banned many years ago that the problem would go away.”

She said, unlike whaling and getting trapped in fishing nets, PCBs were a “silent killer” and affected entire populations, not just individuals. She said disturbances of the sea-bed, by dredging or drilling, was a particular danger. “Bringing back up huge amounts of PCBs could be disastrous for marine mammals.”