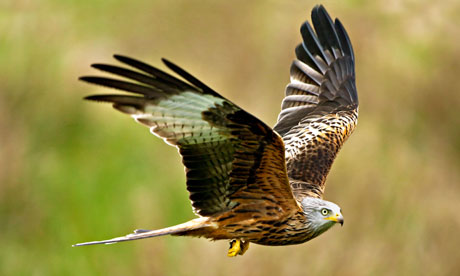 The number of wild birds in the UK is still falling, despite efforts to protect them by changing farming practices. Conservationists have urged the environment secretary, Owen Paterson, to use the money newly available from the EU’s common agricultural policy to step up protection measures.

Since 2003, there has been a 13% decline in the population of farmland birds. In the five years to the end of 2012, the decline was 8% overall. The decline has slowed, according to the Wild Bird Indicator statistics released by the government on Thursday, and some species are in better health than they were in the 1970s when data began to be comprehensively collected. However, conservationists are concerned that the drop in numbers is continuing, with a halving of farmland bird numbers in the past 40 years. Woodland birds are down 17%.

Turtle doves have had their lowest level of sightings since records began. Lapwings are down by nearly two thirds since 1970, while corn buntings are down nine-tenths in the same period, and the number of skylarks is down by well over half.

But jackdaw numbers have gone up by 140% since 1970, and the increasingly common woodpigeon is up by a similar amount.

Farmland birds suffer from intensive agriculture, as farmers often remove or drastically cut back the hedges and trees where many of them live, while pesticides can leave them with less prey, and a lack of wild field margins cuts down on habitats.

There are some government-sponsored schemes to encourage farmers to make room for wildlife, for instance by leaving field margins wild, cutting down on pesticide and artificial fertiliser use, and leaving some areas fallow or pasture. There are also strict laws against killing rare birds of prey, but conservationists think these are frequently flouted.

Martin Harper, conservation director at the RSPB bird charity, said: “The trend for farmland birds continues to go downwards. The decline has slowed, and wildlife friendly farmers who put conservation measures in place on their land must be congratulated for their hard work. But if we are all going to work together to bring wildlife back to our countryside, then the funding must be there for these measures to continue.”

Under the reforms to the common agricultural policy, which were agreed this summer, the government has the ability to divert some of the millions of pounds of funds available – which come ultimately from taxpayers – to environmental stewardship schemes to reward farmers for good practice.

The environment secretary, Owen Paterson, has still not said how he intends to allocate the funding, which could go up to 15% of the agricultural subsidies budget. But given the government’s freedom of action under the new rules, much of it could go to farmers based not on their practices but on the amount of land they farm, as other subsidies are.

A decision is expected before the end of the year, and green groups are concerned that the amount devoted to environmental measures will not be enough to halt further declines in wildlife numbers. “Without Owen Paterson’s help, farmland wildlife will continue to struggle, along with those farmers trying to help,” said Harper.

A Defra spokeswoman said: “Agri-environment schemes play a vital part in providing benefits for wildlife and will continue to be an essential element of the next rural development programme.”

This article was written by Fiona Harvey for the Guardian.

I miss lots of birds in my area i do not see anymore.