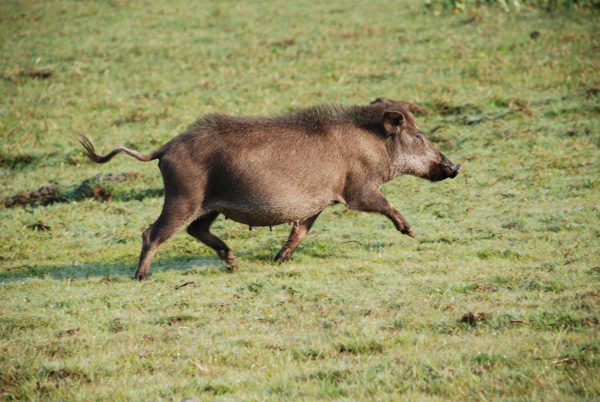 Ordinarily, invasive and exotic species are a grave threat to native wildlife: outcompeting local species, introducing parasites and disease, and disturbing local ecological regimes. A unique case in the Brazilian Pantanal, however, has turned the tables; here, an introduced mammal has actually aided the conservation of native wildlife.

The impact of feral pigs (Sus scrofa) is a serious threat to biodiversity in many ecosystems around the globe. Their destructive rooting behavior and voracious appetite are often severely damaging to populations of plants and small animals, not to mention they serve as a reservoir for a host of zoonotic diseases. In the Pantanal, however, introduced feral pigs have had a positive impact on wildlife communities and the local culture.

The Pantanal region of South America, which extends beyond Brazil into Bolivia and Paraguay, is one of the largest freshwater wetlands on the planet and boasts a diversity of unique wildlife- but this hasn’t always been the case.

Previously, commercial bush meat hunting was a somber threat to biodiversity in the Pantanal. Prohibitive legislation changed that in 1967, banning commercial and recreational hunting and extinguishing the pelt and skin trade.

The introduction of feral pigs (about 200 years ago) relieved a significant amount of hunting pressure on native species, allowing populations a chance to rebound after the legislation. Pantanal denizens prefer to hunt pigs as opposed to native wildlife because they are abundant, easily accessible, and provide a substantial amount of meat and oil. Pig hunting has become an important part of Pantanal culture.

In addition to a reliable source of protein, pigs provide oil and fat which is used for cooking and curing meat. This valuable resource is important in a place where resources are limited and preserving food is vital.

Arnaud Desbiez, the Regional Coordinator of Conservation and Research at the Royal Zoological Society of Scotland, has been studying feral pigs in the Pantanal for some time. Along with his colleague, Alexine Keuroghlian with the Wildlife Conservation Society-Brazil, Desbiez interviewed local hunters about their hunting practices and found that 93% of respondents preferred to hunt feral pigs as opposed to native wildlife, such as collared and white-lipped peccaries, other members of the swine family.

Local hunters are even managing the feral pig population to their advantage, capturing young male pigs, castrating them, and releasing them so that they can grow, gain weight, and be optimal hunting targets when they reach adulthood.

“Feral pigs are hunted on horse[back] with dogs…this means that the young are often separated from their mother and will die of hunger or through predation,” he told mongabay.com.

This human-induced mortality, paired with natural, seasonal effects, is helping to keep the pig population stable.

What is more worrisome for pigs are seasonal floods, he remarks “floods strongly affect the availability of their resources.”

Currently, it would appear that the hunting of feral pigs, an exotic species, is a win-win situation for both residents and native wildlife in the Pantanal. This is, of course, provided that the pig population continues to be regulated by hunting activity. If pig harvesting is abandoned, an increased feral pig population could alter community dynamics of native wildlife. Luckily for native peccaries, however, competition from feral pigs is not enough to endanger their populations. In another study, Desbiez and colleagues illustrated that the niche of feral pigs does not significantly overlap with that of native peccaries so they are not directly competing for the same resources.

The detrimental effects of invasive species have been extremely well-documented with acute effects on ecosystems and species around the globe: invasive cane toads in Australia, European starlings in North America, brown tree snakes in Guam, eastern gray squirrels in Europe, and Africanized honey bees in South America. But not all invasive stories end sour.

Atypical invasive success stories such as this one are becoming more common. Scientists are recognizing the beneficial effects of some exotic species. In Pennsylvania, for example, populations of songbirds have increased due to additional food resources from introduced fruiting trees and vines. In Puerto Rico, degraded land has been colonized by exotic species of trees that have expedited the process of succession, allowing land to be restored more quickly and providing habitat for native wildlife in the process.

This begs a new perspective on invasive species management. Conventionally, the response to an alien species invasion, if caught soon enough, is eradication. This is based on the premise that exotic species, as aliens to their colonized locality, do not belong there and will disrupt the local ecology of the ecosystem. While this has often been the most prudent strategy, the increased rate at which invasives are invading, and the likelihood that it will continue to increase due to human activity, indicates that a new approach may be in order.

Scientists are acknowledging that exotic species are not all hazardous, and may even be beneficial in some circumstances. From this acknowledgement a new paradigm has been suggested: conciliation biology. A recent paper in the journal of Evolutionary Applications by Dr. Scott Carroll from the Institute of Contemporary Evolution encourages conservation biologists and natural resource managers to consider the ecological benefits of exotic species before turning to eradication.

In cases like feral pigs in the Pantanal, beneficial effects on ecosystems, livelihoods, and culture may outweigh the orthodox strategy of eradicating invasives.