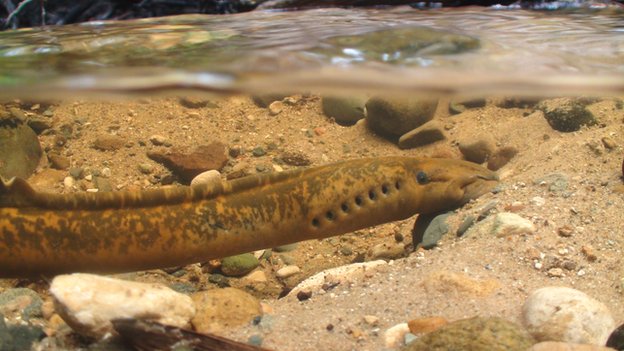 Male sea lampreys heat up special fat deposits during sexual encounters, scientists have found. The bizarre vertebrates are best known for their blood-sucking mouths filled with teeth and a razor sharp tongue.

Males also have a raised bump of tissue along their back which they rub against females during courtship. US researchers discovered that this tissue generates heat in the presence of ovulating females, and heats up more for some than others.

The team from the Michigan State University, US, published their results in the Journal of Experimental Biology. Sea lampreys are parasitic animals found in the North Atlantic Ocean. The jawless vertebrates look similar to eels and adults can measure over 45cm in length.

Researchers first began to investigate the males’ bump, referred to as “rope tissue” by biologists, after observing how it was used in courtship dances. “We initially thought this might be a mechanical device,” said Professor Weiming Li, a neurobiologist on the team that undertook the study.

“Females are more passive [and] the male will wrap its body around the female’s belly – almost like he’s stripping the eggs out of her.” Mature males release a pheromone to attract females to their nest, where they rub this rope tissue against the females’ abdomens.

If females respond favourably, males bite onto their heads with their oral disc and twist around their bodies. Spawning ends with both animals thrusting to release sex cells that fuse and develop in the nest.

Under the microscope, scientists found that the rope tissue looked remarkably similar to “brown fat” found in some mammals that allows them to warm up without exercising.

The team were intrigued by this similarity because although brown fat is essential for species that need to maintain their body temperature, lampreys fluctuate to match the temperature of their marine environment.

Aware that the lampreys did not need this specialist fat to keep themselves warm, researchers investigated what role it might play in reproduction. Using small temperature probes, they were able to record how the tissue reacted in the presence of a female.

They found that the rope’s temperature immediately rose by 0.3 C when an ovulating female was nearby. Prof Li suggested that after attracting females to their nest with pheromones, the males could be using the heated tissue to co-ordinate or entice females to join the spawning act.

He said he was fascinated by how this signal was transmitted to the tissue so quickly and aims to address this in future studies. Sea lampreys are “anadromous”, meaning they are born in fresh water, migrate to the sea for their adult life and eventually return to freshwater to spawn and die.

In the UK, a recent rise in sightings of the animals is considered a sign of improving water quality because they only breed in clean, freshwater habitats. But the “aggressive predators” are considered a pest species in the Great Lakes region. They are native to the Atlantic Ocean but spread into lakes following the construction of canals in the 1800s and now threaten the ecological balance.

The primitive creatures attach to larger fish with their tooth-filled mouths and rasp with their tongue to suck out blood and body fluids, earning them the nickname “vampire fish”. Researchers have been working on a synthetic pheromone to help to lure sea lampreys out of the Great Lakes and surrounding rivers where they spawn.

“I have been involved in lamprey biology for many years and I really believe you should know your enemy,” said Prof Li whose work is supported by the Great Lakes Fishery Commission.

“Because the reaction is so apparent, I suspect the male is sending a signal so if we can find a way to stop this signal then we can probably have an effective way to stop them from reproducing.”

This article was written by Ella Davies for BBC Nature.