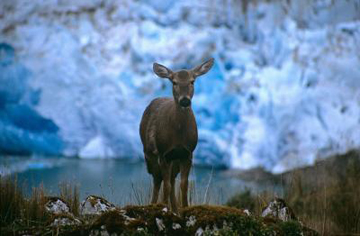 The reemergence of the endangered Huemul deer (Hippocamelus bisulcus) marks a momentous achievement by local governments and conservationists worldwide. From the brink of extinction—with populations decimated to one percent of what they previously were—the Huemul populations have not only stabilized but are steadily increasing, according to a new study in Oryx.

A naturally docile and peaceful animal, the Huemul made for easy prey to European colonists and poachers. Coupled with the mass production of cattle in their ecosystem, this endemic animal’s populations plummeted so severely the species was nearly lost forever. In the 1990s scientists estimated the deer’s population had fallen by 99 percent while its range had been cut in half. The most recent estimate of global population put the deer’s numbers at 2,500.

This severe decline prompted the Chilean government, as well as conservationists worldwide, to act quickly in order to save one of their most nationally known species. Field stations were set up across Bernardo O’Higgins National Park Patagonian region, giving park rangers a base of operations as well as provided scientists a more convenient way to monitor the Huemul populations.

“Our results suggest that synergistic conservation actions, such as cattle removal and poaching control, brought about by increased infrastructure, can lead to the recovery of species such as the threatened Huemul,” co-author Cristóbal Briceño, a researcher with Cambridge’s Department of Archaeology and Anthropology, said.

The results of these enforcement efforts were almost instantaneous, leading to a full on renewal of the Patagonian environment. The Huemul were able to descend from the mountain environments of the region, where they had sought refuge, back to their verdant grasslands. In these study areas, at least, counts of the Huemul population showed that the species was re-bounding to pre-cattle days.

Bernardo O’Higgins National Park is Chile’s larges protected area and one of the most biodiverse places in all the world, encompassing fjords, mountains, glaciers, islands, grasslands, and forests, each with their own unique ecoregion. Many of these ecoregions are the homes to plant and animal species that exist nowhere else in the world, such as its own species of skunk, fox, and even cougar. The region is also home to a massive diversity of marine life ranging from sea anemone to sea lions.

The geography and location of this region are primarily responsible for the high biodiversity that is found there, most notably the Andes and the Fuegan mountain ranges. When water evaporates in this region wind pushes this warm moist air towards the Andes and Fuegan mountains where it then cools, condenses, and precipitates, providing all the water required producing temperate rainforests. Meanwhile colder water currents coming up from the Antarctic keep the coast cool and wet.

The Magellanic subpolar forests are one of the resulting ecosystems. Back in the Ice Age the entire region was practically covered in glaciers leading to presence of a multitude of islands, straits, and fjords in the present day region. In the western reaches of the forest the oceanic current leads to high levels of wind and rain, coupled with the loose rocky soil and low-growing flora. The region is an elaborate mosaic of peat, mosses, shrubs, and grasses. Farther inland from the coast, evergreen rainforests can be found spanning a vast portion of the park; this region is a sea of verdant green trees with mountains framed in the background.

This article was written by Alexander Holmgren for Mongabay.com