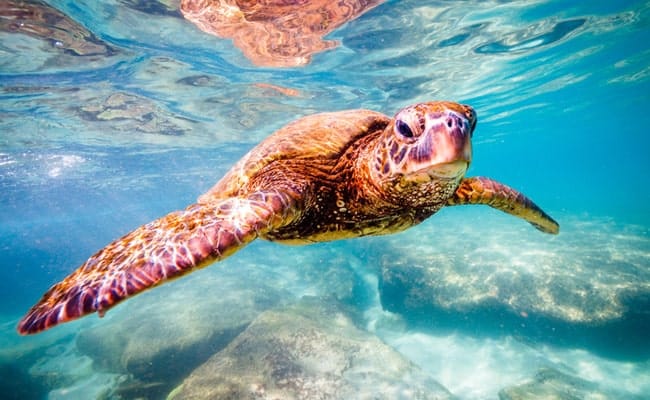 Located in the Cayman Islands, the Cayman Turtle Centre has drawn significant criticism over the years for mistreating its resident sea turtles.

Back in 2012, World Animal Protection released a scathing report outlining numerous problems there, including health risks to guests and a failure to meet conservation mandates. Unfortunately, little has changed over the years.

The facility is now home to more than 5,000 otherwise solitary and far-ranging endangered green sea turtles. These incredible creatures are kept in cramped, overcrowded and unsanitary conditions that have resulted in abnormal behavior, serious genetic issues, thousands of deaths from disease, aggression and even cannibalism.

Last year, the Cayman Turtle Centre was featured on the World Animal Protection’s “top ten”list of the cruelest wildlife attractions in the world.

Even though the facility is largely subsidized by the government, it still relies heavily on tourists to stay in business. Yet travelers –and major travel companies — are increasingly unwilling to support venues that are harmful to animals.

Now, in a win for sea turtles, TripAdvisor has pulled the plug and removed tickets to the facility from its website. This change builds on company efforts to stop supporting attractions that allow the public to interact with captive wild animals and endangered species.

Now there’s even more pressure on Carnival Cruise Line to follow suit. Despite an awareness of the problems there, Carnival has continued to prioritize profits over the welfare of sea turtles.

Yet as one of the world’s largest cruise lines, Carnival has the power to help stop the suffering and exploitation of sea turtles at this facility — and to change the way people view captive wildlife.

Last month, World Animal Protection launched a campaign urging Carnivalto stop visiting the turtle center. And since that time, thousands of people have spoken out asking the company to make a change.

“The public outcry about the ongoing animal cruelty at the Cayman Turtle Centre is growing every day. TripAdvisor has moved away from selling tickets to the centre; it’s time for Carnival to stop ignoring public opinion and turning a blind eye,” said NeilD’Cruze, World Animal Protection’s senior wildlife advisor. “TripAdvisor’s decision sends a clear message – animal suffering is not something tourists want on their holiday checklist.”

World Animal Protection ultimately hopes to see the facility turned into a legitimate rehabilitation and education center — something that most tourists could easily support.

You can help by signing and sharing the petition asking Carnival Cruise Lines to stop bringing tourists to this facility.

For more information on how to help support this campaign, check out World Animal Protection – and its animal-friendly tourism guide – for alternative destinations.