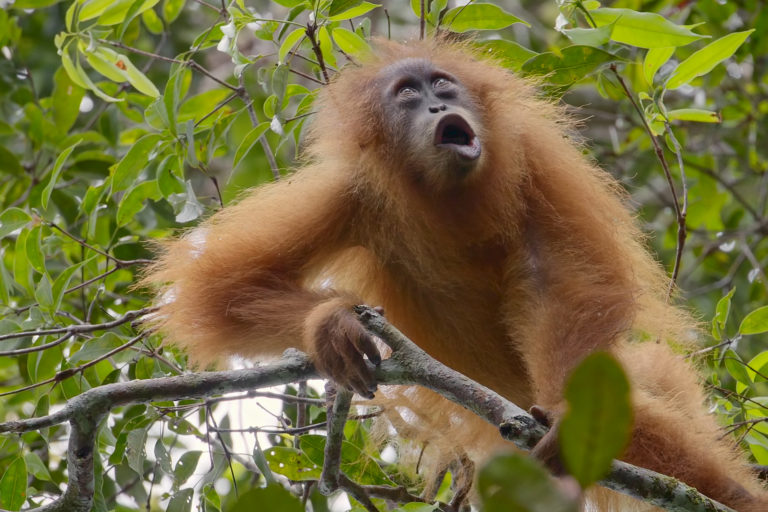 JAKARTA — Inspired by an article on Mongabay, a documentary film on the world’s rarest and most threatened great ape species is now racking up awards on the international film festival circuit.

Now Or Never is a 25-minute film directed and produced by U.K.-based Matt Senior that tells the story of the Tapanuli orangutan (Pongo tapanuliensis), a species that was described in 2017 but is already teetering on the brink of extinction.

The filmmaker, who asked to be referred to by his first name, said the idea for the project came to him from a Mongabay article about the discovery of the orangutan in northern Sumatra, Indonesia.

“I was just reading about the announcement of the new species on Mongabay. From there, I got in contact with this orangutan conservation organization,” he said, referring to the Sumatran Orangutan Conservation Programme (SOCP). “I pitched my film idea to them. I said I feel very passionate about it.”

Matt said he was motivated to make the documentary, the first about the Tapanuli orangutan, because it was threatened with extinction, in large part by a controversial Chinese-funded hydropower project under construction in the forest ecosystem that’s home to the only known population of the species.

Only about 800 of the apes are believed to survive in the Batang Toru forest in northern Sumatra, a tract one-fifth the size of the metropolitan area that comprises Indonesia’s capital, Jakarta.

Conservationists estimate that a loss of more than 1 percent of the population per year will be disastrous for the species, which has a low reproduction rate and is highly sensitive to disruptions in its habitat.

Pre-construction activity for the 510-megawatt Batang Toru hydropower plant has already driven some of the orangutans out of the forest and into nearby plantations.

“The orangutan sure enough will become extinct if [the dam] got built, as I was told,” Matt told Mongabay.

He pitched the documentary idea to the U.K. National Film and Television School (NFTS), where he was studying, as his final-year Masters project.

“My entire goal was not to produce a film for myself, not for the school, but to contribute towards raising awareness on the conservation of this species,” he said. “Because it’s such a new species, not many people know about them. All these documentaries on the TV are all about the other two orangutan species” — the Sumatran (Pongo abelii) and Bornean (Pongo pygmaeus) orangutans, which are also listed as critically endangered by the IUCN.

After a few months of planning and securing the necessary permits for filming, Matt traveled to the Batang Toru forest. The filming took six weeks, during which Matt experienced everything from trekking through rivers in heavy downpours to falling ill caused by drinking from the river.

Then there was the awe-inspiring moment he first saw a Tapanuli orangutan with her child.

Before filming began, Matt said, the biggest concern was that he wouldn’t get any shots of an orangutan. These apes are so rare that even the local people hardly ever see them.

The night before they went into Batang Toru, a scientist who had just returned from the forest told Matt that he’d have to be really lucky to see an orangutan. The manager of the camp where the SOCP was stationed told him the same thing during the six-hour trek to the camp deep into the forest.

“She told me it took her several weeks to see her first orangutan,” Matt said. “And panic started to set in.”

But then on the first night at camp, two conservationists, who had been looking for orangutans all day in the forest, came back to camp, saying they’d spotted a mother orangutan called Cemara and her juvenile son, Cakra, about 7-years-old.

“So that fear of not seeing orangutans completely disappeared,” Matt said.

Early the next morning, the conservationists and Matt started trekking to the nest that Cemara had built the night before. They needed to arrive at the nest before the orangutans woke up so they could follow them.

“It was just life-changing, that moment, when you looked through the lens and saw it looking back,” Matt said. “I was lucky enough to see them, but at the same time it’s very sad … thinking they could be gone in the next few decades.”

The conservationists and Matt followed the two orangutans for half a day before they disappeared.

The following afternoon, they encountered a different adult orangutan, together with her 3-year-old daughter, and also followed the pair for a few hours before they built their nest for the night.

“And the following morning, we woke up early, arrived at their nest, and followed them for a full day,” Matt said. “The mother didn’t mind us. But the child was very curious. For such a young child, she would often wander off on her own and stare at us. They’re just so charismatic and such an intelligent animal.”

And that was it. For the next three weeks, Matt didn’t see any other orangutans in the forest.

The filming process had its challenges. Matt, for one, got really ill by drinking from the stream at the camp. He also recalled a particularly intense episode of heavy rain.“When it rained, it just didn’t stop, it went all night,” he said. “And the river started to rise, rising by 2 meters [6 feet] in just a few hours.

And I started to panic, and [the conservationists] just laughed at me because they had experienced it before.”Despite the challenges, Matt said the kindness of the SOCP staff helped him pull through.

“There were some tough moments, like high altitude, rugged terrain, and the humidity was really high, but they made it really easy,” he said. “They made jokes. They were the most helpful and nicest people you could imagine, and I am very thankful for that and proud to call them friends now.”

After spending six weeks in Sumatra, including interviewing locals, Matt wrapped up the filming.“I will never forget the memory. I still keep in touch with several people from the organization [SOCP],” Matt said.

Back in the U.K., the crew then had several weeks to put the documentary together in post-production and Matt said, “I had the most amazing team of people working on the project and I am grateful to each and every one of them.”

Since then, Matt has submitted Now Or Never to various film festivals around the world — and even won a couple of awards in the process.

“The goal with Now Or Never has always been share this story with as many people as possible and help raise awareness, so the team and I are delighted that Now Or Never has been selected for several film festivals around the world,” he added. “But for the film to then win multiple awards, I cannot explain how extremely proud we all are.” 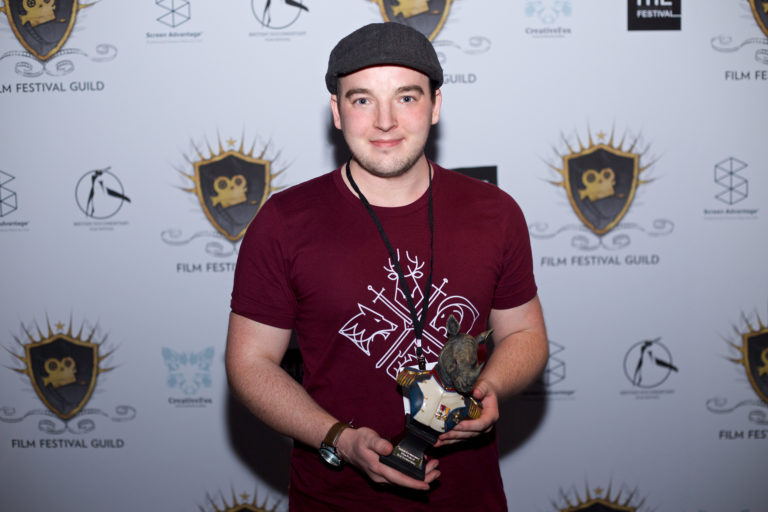 Filmmaker Matt Senior with his award for best documentary at the British Documentary Film Festival. Image courtesy of Matt Senior.

The memory of that first encounter with Cakra, the juvenile orangutan, deep in Batang Toru still sticks with him, Matt said.“I got in a position to be at the same eye level with them, and this 7-year-old orangutan just came over to me and he was hanging about 2 meters directly above my head, just staring at me for two minutes,” he said.

“And it was just an incredible moment. I wanted to film it but at the same time I just wanted to be in the moment.”He ended up not picking up his camera.“He was so innocent and yet so naughty, throwing sticks at me,” he said. “And they’re animals that can’t defend themselves against this dam.”

This article by Hans Nicholas Jong was first published by Mongabay.com on 23 May 2019.