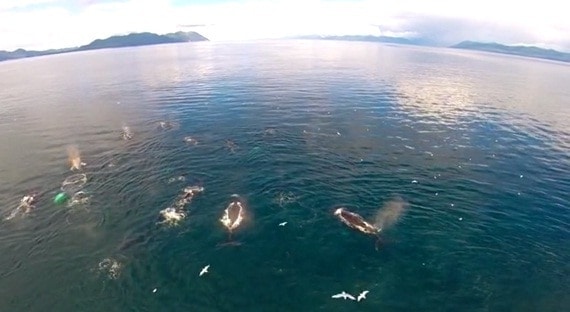 Apart from their massive size, humpback whales are most known for their extensive, complex “songs” that male humpbacks use for communication. But, humpback whales also have some fascinating feeding behaviors that are also worthy of attention—particularly bubble-netting. This form of feeding behavior occurs when groups of about four to twenty humpback whales concentrate their prey—like herring or krill—in large groups by producing bubbles and vocalizations before lunging at them, according to the Alaska Fisheries Science Center, Auke Bay Laboratories.

In recent footage captured off Alaska, a drone caught this incredible behavior on film as humpback whales race along the water’s surface in search of their prey. Then, around 50 seconds into the video, members of a pod of these whales lunge from the water’s surface and trap their tasty meal. Other footage recently captured off Norway filmed similar behavior, though in a much closer view.

Apart from this fascinating feeding behavior, a recent study also found out that humpback whales work together when feeding at night in dark, deeper water. The study, published in Scientific Reports, found that the whales make “tick-tock”-like noises—which may be used as a signal to notify nearby whales that food is in the area, or to help draw one of their prey, sand lance, up from the ocean floor.

Humpback whales can grow up to a staggering 60 feet long and weigh up to 40 tons, according to National Geographic. They are distributed throughout the world’s oceans from subpolar to tropical waters, and make vast migrations each year to breed. Humpback whales are listed as endangered under the Endangered Species Act, though two populations are under review for delisting. Commercial whaling activity severely decimated populations, but humpback whales are said to be recovering today. Current threats include vessel strikes, entanglement in fishing gear, habitat degradation, and more.

Take a look below for a great view of this feeding behavior:

This article was first published by Oceana.org on 18 Dec 2014.

This is fantastic to see them in a social group