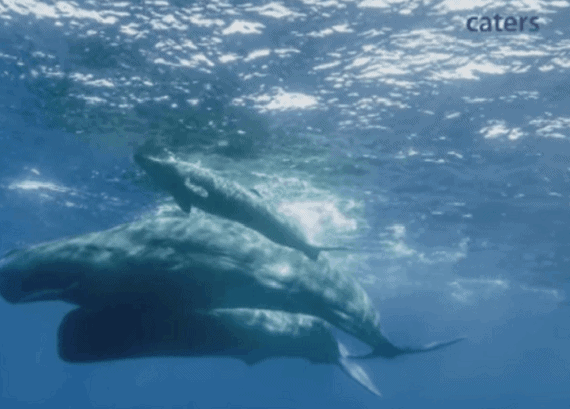 Spotting elusive, deep-diving marine animals in the wild is certainly a treat for anyone, but catching them engaging in particularly rare behavior like giving birth or bubble-netting is especially rewarding.

Recently, wildlife photographer Kurt Amsler was in the right place at the right time for capturing one of those very moments with sperm whales.

In a recent video, Amsler witnessed a pod of sperm whales congregating together at the water’s surface around the Azores islands off Portugal—and soon realized one of the whales was giving birth.

Shortly after, the surrounding whales helped bring the calf to the water’s surface and acted as midwives, reports Caters News. Amsler and his team received special permission from the Azores government to film the occurrence.

Sperm whales are truly remarkable creatures. They are the world’s largest toothed whale (the males can grow to an astounding 52 feet long and weigh up to 45 tons!) and they have the largest brain of any animal. Sperm whales can dive over 3,000 feet deep and remain submerged for two hours—two abilities that help them capture prey. They are also equipped with conical-like teeth to help them trap squid, which are their preferred prey. They are found throughout the world’s oceans, though their distribution is primarily dependent on food availability and breeding conditions, says the National Oceanic and Atmospheric Administration (NOAA).

Sperm whale populations significantly declined over the previous two centuries from commercial whaling, with some estimates saying they declined by as much as 75 percent. Though they are now the most abundant of the large whales, they are threatened from ship strikes, fishing activity, and anthropogenic noise, such as from offshore oil and gas exploration, says NOAA. Sperm whales are listed as endangered under the Endangered Species Act and as vulnerable under The International Union for Conservation of Nature and Natural Resources’ Red List of Threatened Species.

Take a look below for a glimpse at this incredible event:

This article was first published by Oceana.org on 04 Dec 2014.