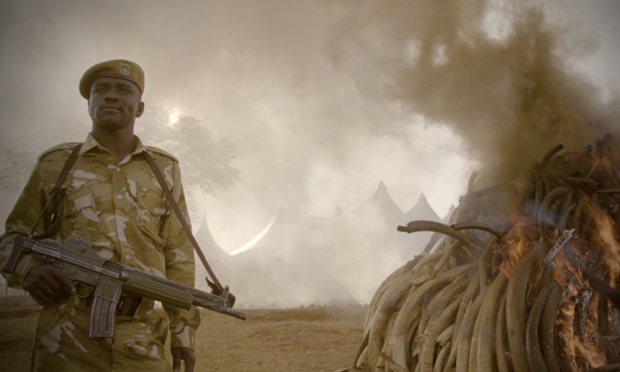 It is obviously more than a game and this documentary directed by Kief Davidson and Richard Ladkani – and exec-produced by Leonardo DiCaprio – showing on Netflix, brings a new urgency to an old subject: the ivory trade, which is threatening the world’s elephants.

This threat has not been cancelled or brought under control, as I had assumed. The film persuasively argues that it is all but out of control: so much so that elephants are in danger of being wiped out in the wild in just a matter of years. One of the biggest mammals on Earth might vanish.

And the market forces driving the trade stem from just one country: China, where there is a huge appetite for luxury goods made of ivory. Well-organised criminal gangs poach the elephants, and get the ivory in container ships to China via south east Asia: the Vietnamese connection.

In the most grisly way, the well-publicised extinction threat and outrage are themselves creating the luxury cachet and driving up the price, encouraging the market which in turn worsens the danger still further.

With elephants in such dire straits, competing poachers and illicit buyers know not just that they can make a fortune, but that there is only a short period of time in which to do it. The price rises all the time, and the window of opportunity is closing as well. They are in an extinction race to the bottom.

And if elephants disappear in the wild, these same market forces in luxury goods mean that other species will be in danger too: the rhino, the giraffe, the lion. We are wearing down the fabric of biodiversity.

The awful truth appears to be that the Chinese government has legitimised and stimulated this trade by creating a notional legal “allowance” for domestic consumption of ivory, which naturally only encourages the black marketers to use this supposed legality to launder their mountains of illicit material. Any artefact, any brutally severed tusk, can always be claimed to come under the “legal” umbrella.

An anti-poaching campaigner says: “One person holds in his hands the fate of elephants: the president of China. I think it is the first time in history that one person has in his hands the destiny of an entire species.” An observer is entitled to wonder if this situation is being helped by any possible state corruption in Africa. Investigating that isn’t the point of the film. But China’s huge semi-legalised ivory hunger is certainly the driving force.

The film is perhaps a little too excitable and enamoured of its own narc-thriller style, with mannerisms that reminded me of Paul Greengrass or Michael Mann: particularly the scenes of Swat-type attacks and dramatic overhead shots of cars moving swiftly across open country.

After a while, I felt that any time the film spends not demanding to speak to the Chinese president is a waste of time. But maybe the more realistic solution is not to focus on China, but on stronger protective action on the supply side, in Africa. In any event: a committed, valuable film.

This article was first published by The Guardian on 31 Oct 2016.