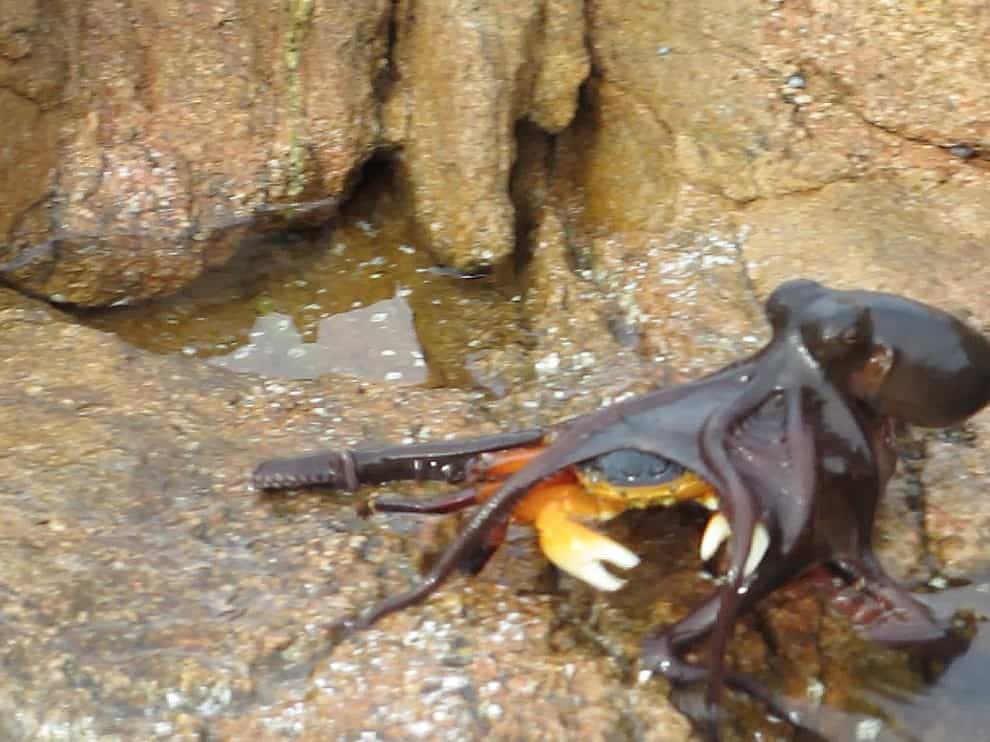 The predator’s “sheer aggressiveness” surprised even an octopus scientist.

Elusive creatures known mainly for their eight arms, ink blast, and high intelligence, octopuses are also fearsome predators with a variety of natural weapons at their disposal.

Porsche Indrisie learned that firsthand recently when, much to her surprise, a small octopus burst out of a tide pool to capture an unsuspecting crab on Smiths Beach in Yallingup, Western Australia (map).

She captured it on video (Warning: There’s some salty language near the end.)

“I have never seen anything like this before. I was filming with no purpose, but what I captured ended up being perfectly timed,” Indrisie told National Geographic.

We emailed Roger Hanlon, a senior scientist at the Marine Biological Laboratory in Woods Hole, Massachusetts, to find out more about octopus hunting strategies.

What type of octopus are we looking at here?

[A] typical shallow-water octopus. There are roughly [more than a hundred] species very similar in size, body, form, et cetera.

Are all octopuses carnivores? And, if so, how do they kill their prey?

Yes, the common shallow-water octopuses are all carnivores. They envelop the prey and bite, [injecting] a neurotoxin.

Is it risky behavior for an octopus to venture onto dry land like this?

As long as their gills are wet, they can stay out of water for a minute or two without damage. It’s the suckers that often get fouled up if they traverse dry, [coarse] materials. In wet tide pools like this one, they are OK.

I suspect if there [were] a gull or other predatory bird around, it would eat the octopus. That is one reason, perhaps, [why] the octopus moved so fast.

Can an octopus survive long on land? Personally, I was amazed how quickly it could move out of the water.

Not long at all! I was also amazed at the speed. I thought the video was sped up.

Is this type of ambush hunting in tide pools common behavior for octopuses?

Yes, this behavior is common. Some species of octopus make this their primary habitat, so they are adapted to staying in tide pools and making very short forays [that is, seconds] out of the water.

What does their diet mainly consist of?

Crabs are a favorite of octopuses. Some species like mussels too.

Did anything else strike you about the video?

The sheer aggressiveness is impressive even by cephalopod standards. I’m a field researcher and have spent hundreds of hours underwater studying cephalopod behavior, [and] this is one of the really aggressive [and] impressive attack sequences [that I’ve seen].

After it catches the crab, the octopus immediately disappears underneath a rock. I know you’ve done a lot of research on how cephalopods camouflage themselves, including this striking video, so, if you can generalize, how “sneaky” are octopuses by nature?

I don’t like the term “sneaky.” Octopuses are well known for their stealth approach to prey. They use slow approaches combined with their camouflage abilities to get within striking distance. The arms and web form a functional gape that is equivalent to a large mouth. It is a sophisticated evolutionary development.

This article was first published by National Geographic on 24 Feb 2015.