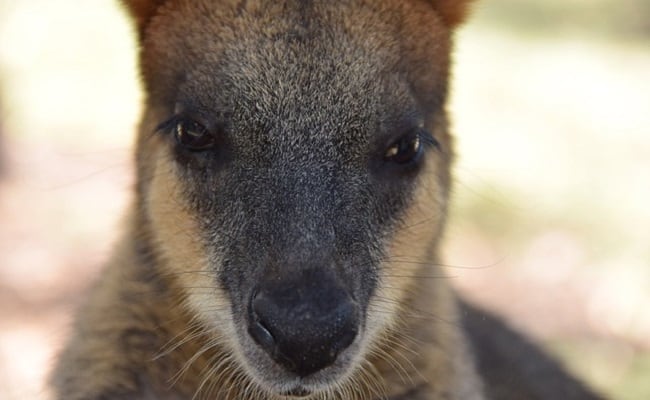 Some really despicable visitors to the Fuzhou Zoo in China last month were unhappy with the inactive kangaroos that were resting inside their enclosure. The group wanted to see those kangaroos jump, so they began pelting them with bricks and chunks of concrete.

When zoo employees saw what was happening, they didn’t escort these abusers to the exit or notify authorities and have them arrested for animal cruelty. Nor did they do anything to protect the kangaroos. No, an attendant simply told these losers to stop throwing the rocks, which they denied doing.

This wasn’t even the first time the kangaroos had been pelted with objects. Employees had previously removed a rock display near the enclosure, but visitors could still find bricks, concrete chunks and rocks elsewhere in the zoo.

Zookeepers were reportedly shocked when they checked on the kangaroos sometime later. A 12-year-old female kangaroo’s foot was smashed and nearly severed. She wasn’t able to move.

“It showed that it was in deep pain,” a zoo veterinarian told the Shanghai news website The Paper. “But it wasn’t clear where the pain was.”

Apparently the zoo did not take any X-rays find out where the pain was, either. The veterinarian would have been able to see the kangaroo’s major internal injuries caused by the bricks.

After suffering for a few days and receiving medication from an intravenous drip, the poor kangaroo died from profuse internal bleeding. An autopsy showed that one of her kidneys had ruptured.

A few weeks later, a 5-year-old kangaroo at the zoo was also pelted with rocks by visitors. It survived its injuries.

To prevent future attacks on the kangaroos and other animals in the zoo–its ostriches have also been previous stoning targets–the zoo has promised to install more security cameras.

That’s a start, at least if zoo employees will actually keep an eye on what those cameras are recording. It would be more effective for the zoo to remove all possible projectiles and to immediately remove all brick-throwing visitors and have them charged with animal cruelty.

Even better would be removing the animals from the zoo and releasing them to sanctuaries.

Keeping animals in captivity may be entertaining to humans, but it’s unnatural and cruel for the animals. This is especially true in China, where lax animal welfare regulations make for miserable conditions in some zoos and wildlife parks.

As the tragic case of the kangaroo shows, visitors generally don’t have to worry about being punished for harming the animals.

Fortunately, things are looking up as animal lovers in China continue to lobby for better laws. Seven years ago, authorities from China’s State Forestry Agency ordered 53 zoos and wildlife parks to improve their conditions, and revoked the certifications of seven of them.

This agency, which has six teams that investigate more than 500 zoos and parks, needs to continue cracking down on these tourist attractions, so no other captive animals ever have to suffer as much as that poor kangaroo did.