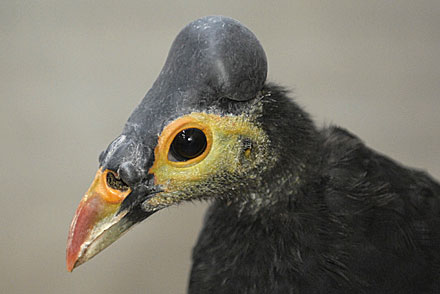 From the time of Magellan, there has been a fascination with the birds that “laid their eggs in volcanoes.” Those birds, megapodes as a group, are in the news again as our Bronx Zoo has hatched young from a captive pair of maleo, the national bird of Sulawesi. The media coverage has stressed the “bizarre” nesting of these birds; I prefer to call it exceptional.

I had the chance last fall to visit tropical Asia for the first time, as part of my journeys to help enhance some of our key conservation efforts. Of particular excitement for me was the opportunity to travel to Sulawesi and see maleos in the wild.

Landing in Manado, the capital city of the north, I recognized that I had arrived where history, geography, and biodiversity collide in compelling ways. It was from Manado that Alfred Russell Wallace wrote his colleague Charles Darwin in 1857 about some interesting ideas regarding what would be later called natural selection.

These ideas were born during Wallace’s incredible investigations of biological diversity across the Malay Archipelago. It is there, on Sulawesi, where the wildlife species’ differences could not be more pronounced in comparison to their nearby western island neighbor, Borneo.

That distinction of biogeography is called Wallacea, and “Wallace’s Line” demarcates where the continental fragments of Australia and New Guinea (like Sulawesi) are colliding with continental Asia fragments (like Borneo) to create the some of the most compelling and complex tropical diversity on the planet.

These ongoing collisions comprise part of the “Ring of Fire,” typified as they are by dynamic landscapes of volcanoes and volcanic heat. Enter the volcano birds.

Volcano birds, the megapodes, are one of the oldest living groups of birds. They are fowl and vaguely turkey-like in appearance. Their origins lie in Australia and New Guinea, and as such their history is separate from pheasants, with which they share many traits. Despite their similarities, there is no overlap in the distribution of megapodes and pheasants (which arose in tropical Asia). Nor do megapodes naturally overlap with carnivores, all of which first appeared north of Wallace’s Line.

That evolutionary and biogeographic distinction goes to the heart of the exceptional breeding biology of megapodes. For it was in the absence of carnivores and potentially competitive pheasants that megapodes evolved their distinctive breeding biology.

Incubation of their eggs is accomplished by external heat — volcanic soils, sun-warmed beaches, or rotting vegetation (compost) — and not by parents. Megapodes lay very large eggs, and insure that they are buried at precise temperatures. The young hatch, dig out on their own, and, astonishingly, fly away from nesting grounds within hours and never directly interact with their parents in doing so.

This exceptional breeding strategy worked in the context of megapodes’ origins in landscapes that formed from Australian and New Guinean plate fragments, and it has allowed many megapode species to successfully colonize islands well out in to the western Pacific.

Yet volcano birds are not faring well in the modern age. The Polynesian diaspora into the Pacific meant that megapode nesting grounds provided easily found egg meals for these seafarers.

There is a dramatic fossil history of megapode extinction across the western Pacific. And today, with all islands and continental fragments of the megapodes occupied by humans, the threat of egg poaching — on beaches that have historically served as nesting grounds for up to hundreds of thousands of eggs — has left nearly half (10 of 22 species) of the megapodes at risk of extinction.

We humans, and our dogs, cats, and rats, have collided with megapodes in ways that make their conservation imperative.

In Sulawesi I saw how our efforts to conserve the species are working. Conservationists help maleo poachers find new livelihoods as the birds’ guardians. They re-bury maleo eggs in warm soil protected by fencing, and away from other villagers and their dogs and cats. Resulting hatching success is high, and the freed maleo chicks have a renewed chance of thriving.

I want to help WCS grow this conservation model across more species of this exceptional group. Learning how to rear megapodes in captivity, as we do at the Bronx Zoo, is part of that goal. Identifying where, among the islands holding the remaining endangered species, there remains sufficient habitat and potential to engage local peoples’ in the protection and safe rearing of megapode eggs, is another goal. Another conservation goal is inspired by the historical capacity of megapodes to disperse and populate the western Pacific. For species like the Polynesian megapode, now restricted to, and on the edge of extinction in Niuafo’ou Island in Tonga, we should consider translocating populations (assisting in their migration) to different islands out of harm’s way.

We must conserve volcano birds in the modern age, where Wallace, volcanoes, and evolution have so dramatically collided. We can do so using our joint capacity for captive rearing and on-the-ground conservation.

This article was written by Steve Zack and published by the Huffington Post.