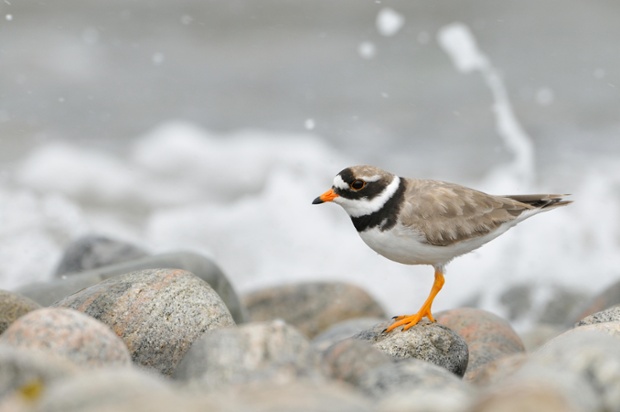 The magical wildlife spectacle of hundreds of thousands of wading birds converging on British estuaries could be under threat as research shows big declines in some of the most familiar species. Results from the Wetland Bird Survey reveals that ringed plovers, oystercatchers, redshank and dunlin are among the eight most abundant species overwintering on UK estuaries to suffer significant and consistent population drops over 10 years.

Conservationists believe several factors are responsible, including climate change forcing the birds to areas outside the UK, and say collaborative international research is imperative. Examinations of the traditional sites, the largest of which include the Wash, Morecambe Bay and Thames Estuary, are also required to determine if there are site-specific issues.

Ringed plovers have suffered a decline of 39% in 10 years in over-wintering birds and those breeding in the UK. Redshank have fallen by 26% and Dunlin by 23%.

Curlew have fallen by 17% and oystercatchers by 15% in the 10 years to June 2012. Knot have dropped by 7% and the bar-tailed godwit by 10%. Grey plover are down by 21%, according to the data collected by thousands of volunteers.

Chas Holt of the British Trust for Ornithology (BTO), who coordinated the survey, said: “I think we should be quite alarmed because the declines for many of these species are pretty consistent. Species like the ringed plover, redshank and dunlin, their decline has been consistent for 10 to 20 years now. And there is no obvious change happening, so in 10 years time we could be well down on numbers.

“It is hard to get a handle on exactly what is going on. When you see declines like this, it could be one of two or three main reasons.

“The overall population of the species as a whole could be in decline. These birds are breeding in the Arctic then wintering much further south in a flyway that runs right from north-west Europe down into Africa. So they are wintering over a large area. So, is the whole population in decline? Are they producing more young but is the survival rate lower? Or are they just slightly shifting distribution?”

Such consistent declines, he said, “mean we certainly have to take stock and understand what is going on”. Research by Wetland International has shown winter populations of some of the species have recently shifted away from the UK to Dutch and German coasts, possibly in response to milder winters. Another possibility is fewer young waders being successfully reared in the Arctic, which is experiencing rapid warming.

Waders produce spectacular shows during the peak period from November to January. The Wash, the largest in terms of overall numbers, holds a minimum of 350,000 birds at a time, not just waders but also ducks including widgeon and pintail, and geese such as the dark-bellied brent goose. It has been estimated that around 2m birds throughout each year use the Wash, where Norfolk meets Lincolnshire, attracted by its vast sandbanks and salt marshes.

Richard Hearn, head of species monitoring at the Wildfowl and Wetlands Trust (WWT), said: “The declines in waders and other wintering waterbirds in the UK over the past decade or more, as revealed by the Wetland Bird Survey, are indicative of wider concerns about the state of our environment. “They demonstrate the unprecedented period of change that these waterbirds are undergoing, and highlight the need for a step change in monitoring and relevant conservation action if we are to avert continued biodiversity loss.”

The Wetland Bird Survey, a partnership between the BTO, the government’s advisory joint nature conservation committee and the RSPB, in association with WWT, monitors birds at more than 2,000 wetland sites from estuaries to ponds across the UK.

This article was written by Caroline Davies for The Guardian.