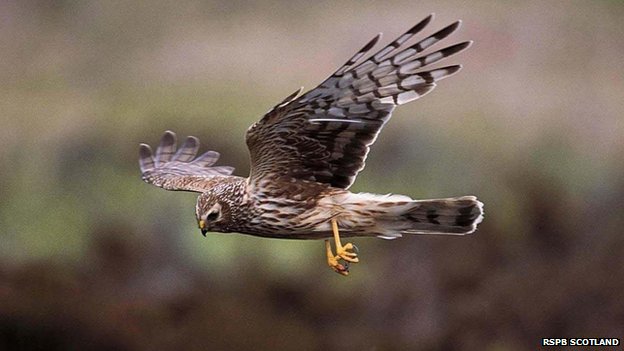 Bird watchers and hillwalkers are being asked to keep an eye out for hen harriers in an attempt to conserve their numbers. The birds of prey are struggling to breed in some areas, partly due to persecution and disappearing moorland.

In 2010 there were 500 pairs in Scotland, the bulk of the UK population. The sighting initiative is being launched by the Partnership for Action against Wildlife Crime (Paw) Scotland.

Members of the public have been encouraged to record where they spot any hen harriers, along with details including behaviour and gender. The male hen harrier is famous for its spectacular looping “sky-dance”, part of an elaborate mating ritual.

The aim is to help Paw Scotland build up a valuable bank of information to help conserve the species for future generations. Factors in their decline include the loss of moorland nesting habitat and feeding range, eggs and young being eaten by foxes, crows and other predators, and illegal persecution.

The spotting scheme was launched by environment minister and Paw Scotland chairman Paul Wheelhouse. He said: “The hen harrier is one of Scotland’s most fascinating birds of prey – with the male’s sky-dancing display one of nature’s great sights.”

He added: “Unfortunately these birds are not thriving in some parts of Scotland where we know they would find a suitable habitat and we are determined to take action to conserve them.

“This initiative will raise the profile of the hen harrier to provide us with important information about their activity and location, and I hope people across Scotland will join the efforts to conserve this alluring bird for future generations.”
New technology

Scottish Natural Heritage (SNH) will record the information and details of how to take part are available on the Paw Scotland website. Ron Macdonald, head of policy at SNH, said: “The public can be of great help by reporting sightings and helping us build a picture of the reasons why these birds aren’t doing as well as we would expect.

“Using sightings from the public, we can assess whether to use some of the new technology at our disposal such as satellite-tagging or camera monitoring, or even where necessary share information with the National Wildlife Crime Unit.

“We do want people to bear in mind though that these birds are specially protected under the law and nobody should approach hen harrier nests or disturb the birds without a licence from SNH.”

RSPB Scotland’s Duncan Orr-Ewing welcomed the initiative. He said: “Recent national surveys have indicated a 20% decline, with significant decreases in parts of southern Scotland and the eastern Highlands.”

Scottish Land and Estates said the matter was also of concern to landowners and managers and highlighted efforts over the past 20 years on Langholm Moor in south west Scotland. The organisation said that despite all the effort devoted to bringing back the Langholm harrier population to its mid-1990s peak, numbers had not responded.

Chief executive Douglas McAdam added: “Among the various causes of harrier decline, we recognise that persecution is an issue in some places and we are working together with our partners on the Paw Scotland Raptor Persecution Priority Delivery Group (including the Scottish Gamekeepers Association) to stamp it out.”

This article was written by BBC News Scotland