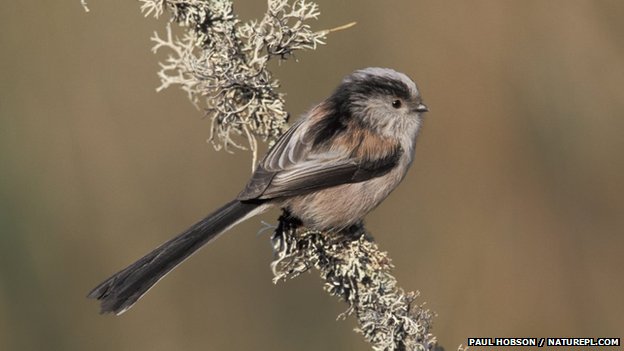 Warm spring weather boosts long-tailed tits’ chances of surviving the winter, scientists have said. The UK’s population of these little birds has more than doubled in the last forty years. A 19-year study by researchers in Sheffield links rising spring temperatures to their improved survival. Biologists suggest the birds are rare “winners” when it comes to climate change. The results are published in the journal Oikos.

The long-tailed tit is named for its distinctive rear feathers that are longer than its body. If judged solely on body size, it would be Britain’s smallest bird. In the past, scientists have suggested that cold, wet weather is bad for small birds as they have to expend energy to keep warm but food is less available.

Bad weather during a breeding season has been linked to smaller populations because birds produce fewer young. But overall survival was thought to be connected to winter conditions. Researchers at the University of Sheffield studied long-tailed tits living wild in the Rivelin Valley, South Yorkshire for 19 years.

They caught the birds and fitted them with identifying rings before releasing them. The scientists returned between March and May every year to assess numbers and ring any new arrivals. The long-term data collected allowed PhD student Philippa Gullett to investigate how the birds reacted to the weather.

She found that survival rates were actually more closely connected with spring conditions and that winter weather had no effect. “What seems to be going on is that the tits try to raise their chicks at any cost”, said Ms Gullett, explaining that the birds only live for around three years, making each breeding season precious.

“If it’s cold and wet in spring, that makes their job much tougher. Food is harder to find; eggs and chicks are at risk of getting cold. The result is that by the end of the breeding season, the adult birds are exhausted.” But when spring conditions are fine, the birds do not wear themselves out and are better able to cope with the autumn and winter weather later that year.

Although cold, wet autumns were associated with a higher death rate, researchers found that this was offset by the benefits of good spring weather. Alongside Dr Karl Evans from the University of Sheffield and Rob Robinson from the British Trust for Ornithology, Ms Gullett was able to link growth in long-tailed tit numbers at the site to rising spring temperatures.

Dr Evans said: “Looking ahead to the future, our data suggest that every single plausible climate change scenario will lead to a further increase in long-tailed survival rates. “While many species struggle to adjust to climate change, these delightful birds seem likely to be winners.”

This article was written by Ella Davies for BBC Nature News.