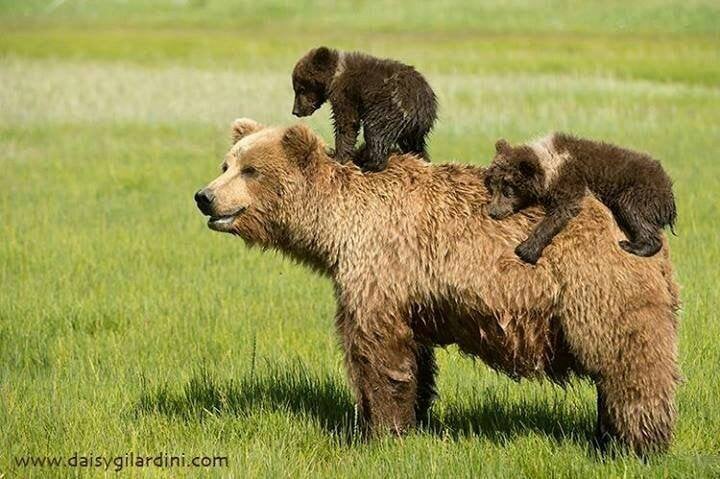 Grizzly bears do not make cuddly pets, but you would be hardpressed to remember that while watching a large mama bear ferry her two furry cubs across a wide lake.

Video shot by David Roseman, who works in Wood Tikchick State Park in southwestern Alaska part-time, shows a clear view of the bear using its strong legs to propel itself into the water. With small bear cubs, only a few months old, sitting perched atop its back, the mother ferries them to the shore.

“I was heading to do a fuel run for the lodge and just saw something in the distance. I was probably within 30 yards,” said Roseman.

Roseman has worked in the park for 21 years, but in the time he’s been there, he’s never seen cubs float across a lake on their mother’s back.

Despite their large hefty bodies and thick fur, brown bears are great swimmers.

Wayne Kasworm, a grizzly bear biologist with the U.S. Fish and Wildlife Service, explained that bears’ high fat content and oily coat helps them easily stay afloat. The bears, which he estimates to be about six months old, will likely start to swim on their own once they reach 30 pounds.

“I once saw a brown bear swim six miles,” said Dave Garshelis, a wildlife research scientist from the Minnesota Department of Natural Resources. He noted that polar bears are by far the best at swimming, but black and brown bears easily take to the water as well.

“I did my best to stay out of her way,” he added. “I knew it was something pretty special.”

According to the park’s website, Wood Tikchick is the largest and most remote state park in the nation, at nearly 1.6 million acres.

Roseman clarified that the bear was swimming from a small island located in the middle of the park’s Lake Aleknagik, and that the distance from shore to shore was no more than 400 yards.

It’s the strong bond between mother and cub that likely would have prompted the little one to stay on its mothers back in the water. As the bear waded into the water, the cubs likely scrambled onto its back to follow. The sloth bearis the only known bear that actively carries its cubs, an adaptation that it evolved to protect its young in tiger-inhabited regions.

Once it reaches the shore, the mother bear promptly straightens up onto all fours and runs into the woods. Its cubs tumble to the ground and stumble to their feet to chase after their mother, who has receded into the bushes.

Neither Garshelis, Kasworm, nor Roseman had seen a bear transport their cubs across a body of water.

Garshelis and Kasworm added that the behavior of the mother bear indicates it was likely frightened by Roseman’s boat. (Roseman confirmed the bear saw him.)

“She bolts when she gets to the far shore,” said Garshelis. “She wants to get out of there.” He added that the bear can be seen turning its head to look over its shoulder throughout the video. Garshelis noted that, while bears have strong maternal instincts, few motivations are stronger than self-preservation.

Brown bears have a well-documented love of the water. A live bear cam at Brooks Falls in Alaska’s Katmai National Park has documented bears wading through fast-moving waters to catch salmon. According to Katmai’s website, bears often sit in what the park has dubbed “Jacuzzis” waiting for fish to swim by.

Roseman has seen them hunting in the salmon-rich waters by “snorkeling,” a bear behavior in which they stick their faces under the water to search for fish while the rest of their body remains afloat.

Bears also use water recreationally. Video from camera traps set up in Yellowstone National Park caught the bears using a natural swimming hole to cool off and splash around.

This article was first published by National Geographic on 29 Jun 2017.