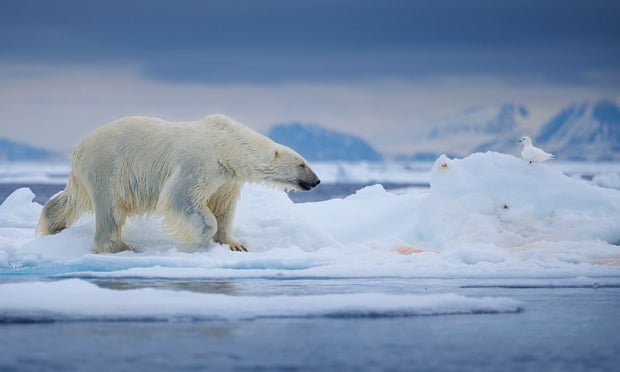 The loss of Arctic ice from glaciers, polar land and sea is increasing faster than many scientists expected, as the Intergovernmental Panel on Climate Change’s (IPCC) report on oceans and the cryosphere said this week.

That’s bad news for polar bear populations, a top expert involved in field studies on the endangered animals has told the Guardian.

This year’s annual minimum of the Arctic sea ice tied with the second-lowest extent on record, a mere 1.6m sq miles, and badly affected polar bear populations that live and hunt on the north slope of Alaska, plus those that live on the ice floes in the Bering Sea.

“Now the ice has gone way offshore we know that the bears aren’t feeding, and the bears that are forced on to land don’t find much to eat. The longer the sea ice is gone from the productive zone the tougher it is on the bears,” said Polar Bears International’s Steven Amstrup.

In 2015, the group reported that the polar bear population in the Beaufort Sea had declined by 40% over the previous decade. “We can only anticipate that those declines have continued,” Amstrup said.

The loss of sea ice this year was so pronounced early in the season that tagging crews from the US Geological Survey (USGS) concluded that the sea ice offshore in the western arctic was too thin and unstable to be able to conduct their studies – the first time the team have pulled their studies because of safety issues.

That’s a far cry from the two decades to 2010 when Amstrup did two two-month field studies a year.

In recent years, the spring season has also been severely hampered by open water, fog and bad weather.

This year, the trends were repeated. Amstrup said: “The ice in the spring … was really tough this year. What ice was there was thin and rough this year. That’s part of progressive trend that we’ve seen over several years.”

The circumstances of global heating in the Arctic region, from record heatwaves in Alaska to the loss of more than 60bn tons of ice from Greenland’s ice cap during a five-day heatwave this summer, including the biggest loss in a 24-hour period since records began.

For both polar bear populations, the circumstances are grim. Those that live on shore aren’t finding much to eat, says Amstrup, and those that live permanently on the pack ice don’t appear to be feeding much either.

“They’re having a long fast in the summer and there’s a limit to how long that fast can last. We’re already seeing indications in terms of poorer cub survival in the Beaufort Sea. An adult bear has a lot of body mass, and maybe can get through a long summer fast, but young bears don’t have the body mass or hunting skills to survive,” he said.

But because 2019 did not set a record in terms of sea-ice loss, Amstrup stressed, we should not be fooled into thinking that, short of an extreme event, circumstances have stabilized or improved.

Amstrup said funding cutbacks and the fact that biologists cannot get out and study the bears means it may never be able to collect the necessary data to assess “just how bad this year was”.

“We know that as greenhouse gas concentrations continue to rise it’s going to be warmer and we’re going to have less and less sea ice until polar bears disappear,” he said.

This article was first published by The Guardian on 29 September 2019.

This is so sad and these magnificent creatures, like so many other, have become the victims of man’s greed. I am ashamed of the human race, but I can’t see the powers that be finding the will to really get to grips with the global warming situation – there are too many vested interests in keeping the money machine churning out profit.

Fair enough concern don’t get me wrong. But why aren’t conservationists listening to sensible ideas for expanding the rainforests instead of calling for more bird-murdering wind farms.