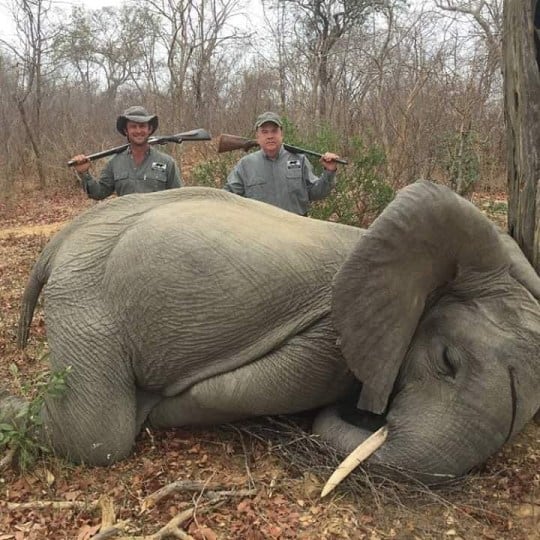 A wealthy businessman has been condemned for posing alongside two ‘baby’ elephants he shot dead during a hunting trip.

Mike Jines, a US energy executive, said he has received death threats after the photos of him standing over the dead elephants with professional hunter Max Delezenne were shared on Facebook last month.

Jines, who is from Alpharetta, Georgia, said he shot the elephants, who were believed to be babies, in Zimbabwe in October 2018 – and has responded to backlash by saying the killings were in self-defense.

Jines also said that the animals were killed in a designated safari area in compliance with Zimbabwe and US hunting law.

‘While I can appreciate that hunting can be polarizing and that views on hunting can vary materially, I am sure that you can appreciate what it is like to deal with the vitriol particularly when the underlying information in this case is inaccurate,’ he said.

Jines said he and his company are working to deal with the public backlash that the photos have caused. He also said he is trying to make sure that people understand the ‘actual facts as opposed to the mischaracterization of the information on social media.’

Commenters on Facebook have since began a heated campaign to shame Jines for the photos. Last month, Jines was doxxed by a commenter who revealed the photos, meaning his personal information, including his business phone number and address, were published online.

‘What an innocent, sweet animal,’ one Facebook user wrote. ‘Elephants are known to be extremely social animals living in a pack.

Not only is this unforgivable but the trauma it caused the tribe makes me believe those idiots should face that poor baby’s tribe without guns.’ ‘Don’t do business with the company!’ wrote another.

These companies skirt the law, saying that they were being “Charged” at by the animals. In most cases they are prohibited from killing these animals unless they are aggressive or “charging” at you. These companies exploit loopholes like that when they get caught. The fact that he Proudly posted these pictures on his Facebook Page with no mention self defense prior to being shamed for it, also speaks to his true character.

Yes- I feel that anger too… But more than that, I feel tremendous sadness for the loss of these gentle creatures. Americans don’t bring large-caliber hunting rifles with them on Safari unless they INTEND to kill some large, unfortunate animal. The self-defense claim is simply a lie. It is my hope that Mike Jines never finds a day of peace or a quiet night’s sleep from this day forward. “Killer” & “Liar” should be a tattoo on his forehead.

You pieces of shit, I would like to hunt you and your family for being worthless human beings!!!

I am so angry! Both of them should go in prison and be taken millions of dollars to save wild animals as they killed innocent living beans someones mom, sister, daughter, brother or son…

THOSE ELEPHANTS ARE *NOT* FULL GROWN FEMALES, ; NOT THAT, THAT MAKES IT ANY MORE MORAL, B/C THE LOSS OF MATURE FEMALES, FROM THE HERD, MEANS A LOSS OF MEMORY INFO, FOR WATER DESTINATIONS & FOOD !
DID HE CHECK, THAT, THESE SO-CALLED, *MATURE FEMALES*, DIDN’T HAVE ANY BABIES, THEY WERE *NURSING* ?
ELEPHANTS AREN’T KNOWN FOR ADOPTING, MAINLY B/C THEY ONLY HAVE 2 TEATS & THEY INVEST A LONG TIME INTO, THE RAISING OF THEIR BABIES, ; ONE AT A TIME IS ENOUGH, FOR THEIR BODIES TO HAVE TO ENDURE !
PROBABLY WHY ELEPHANTS, RARELY HAVE TWINS !

Bombard his company with emails.

A typical display of crooked and sadistic White AmeriKKKan mentality.