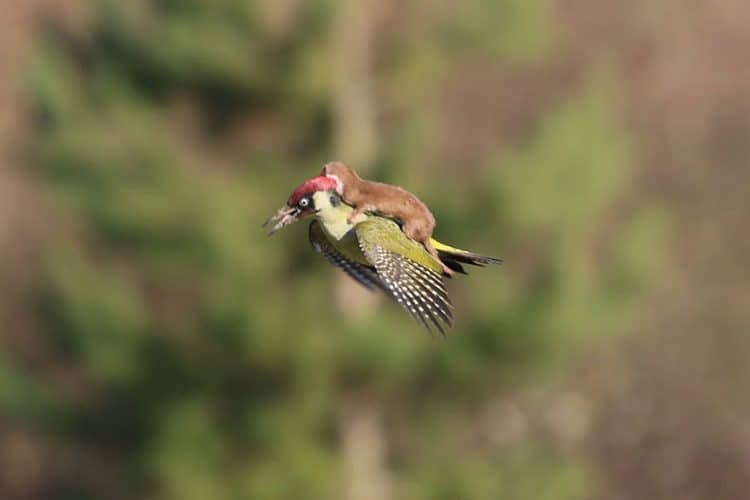 Amateur photographer Martin Le-May, from Essex, has recorded the extraordinary image of a weasel riding on the back of a green woodpecker as it flies through the air.

The photograph was taken at Hornchurch Country Park in east London on Monday afternoon.

Speaking to BBC News, Mr Le-May said he had managed to capture the moment while he was out walking with his wife Ann.

He said: “I heard a distressed squawking noise and feared the worst.

“I soon realised it was a woodpecker with some kind of small mammal on its back.

“I think we may have distracted the weasel as when the woodpecker landed it managed to escape and the weasel ran into the grass.”

Mr Le-May said he was astounded by the reaction to the picture on social media.

The wildlife shot has been re-tweeted several thousand times.

He said; “I’m so proud so many people are getting to see my image. I’m totally taken aback by the response to it.”

‘Ferocious as a lion’

“But weasels are fearless.

“A female weasel weighs less than a Mars Bar but is as ferocious as a lion, so this is why the woodpecker would have been able to take off with it on its back.”

Wildlife presenter Steve Backshall agrees that while highly unusual it is not totally unheard of and has “no reason to doubt” the photo.

He compared the woodpecker to other animals like leaf cutter ants and rhino beetles, which can carry 850 times their body weight.

He said: “The weasel is pretty fascinating as well. It can kill things much bigger than itself, so it’s an impressive little creature when you think about its size.”