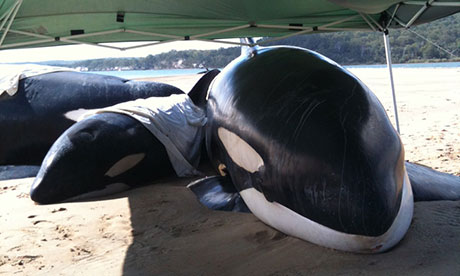 Marine experts are contemplating towing the carcass of a killer whale out to sea to encourage members of its pod to move into deeper waters off Queensland’s coast. Up to eight whales remain near Fraser Island where two whales, a mother and her calf, died after becoming stranded on Wednesday morning.

Rescuers fear the pod could become stranded again. A Queensland Parks and Wildlife Services spokesman, Peter Wright, says if the whales don’t move on they’ll look at ways to coax them out to the open ocean.

“The ideal thing to do would be to let them do it themselves,” he told reporters in Hervey Bay on Thursday. But if that doesn’t happen, authorities may tow one of the dead whales behind a boat and hope the pod follows it out of the channel.

Five other stranded whales were freed on Wednesday afternoon. They are part of the pod that remains in the channel. Sea World marine expert, Trevor Long, says the whales may not have moved on because they’re mourning the loss of the other whales.

“This is a family unit and the [feeling of] loss of those two whales out of that family unit is extremely strong,” he said. He says killer whale strandings are rare. “I’m not sure why they would be there,” he said.

“Whether they are following some type of food there, that might be seal or whale, I don’t know.” A 300-metre exclusion zone for all vessels has been put in place around the whales.

This article was written by Australian Associated Press for the Guardian UK.