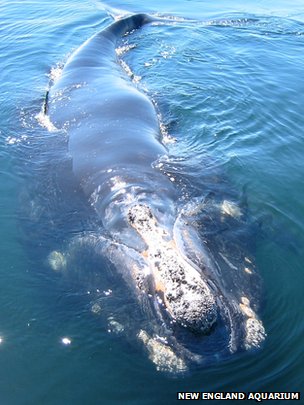 Noise from ships stresses whales nearby, researchers have shown. Ships’ propellers emit sound in the same frequency range that some whales use for communicating, and previous studies have shown the whales change their calling patterns in noisy places.

Now, researchers have measured stress hormones in whale faeces, and found they rose with the density of shipping. The species studied in the Bay of Fundy in Canada, the North Atlantic right whale, is listed as endangered.

It had been thought that hunting by the Basque people a few hundred years ago brought a robust population down to barely sustainable levels. But recent research suggests the big population decline happened much earlier, for reasons that are unclear.

Dr Rosalind Rolland of the New England Aquarium in Boston, US, who led the new study, said the population was now up to an estimated 490 individuals from about 350 a decade ago. North Atlantic right whales (Eubalaena glacialis) roam up and down the east coast of North America, coming to the Bay of Fundy typically in late summer to feed.

Aquarium scientists have been studying them in the bay since 1980. But the new study, reported in the Royal Society journal Proceedings B, came about through chance. Following the al-Qaeda attacks on New York and Washington DC on 11 September 2001, ship traffic in the bay dropped off.

Whale researchers registered a 6 decibel (dB) fall in the intensity of underwater noise, with the change particularly pronounced at frequencies below 150Hz. Fortuitously, another team had just begun a five-year project to gather and examine faeces from the right whales.

Trained dogs are taken on boats, their noses guiding researchers to the bobbing faecal matter, which is then pulled inboard in nets. “We were working on different boats, we knew the different studies were going on without any real interaction,” Dr Rolland told BBC News.

“And it was only when I was preparing for a workshop on ocean noise and stress in 2009 that I realised we had this data and analysed it this way – it was just one of those opportunistic things.” Faeces gathered during the 2001 period of light shipping showed a significantly lower level of metabolites of glucocorticoid hormones, which are associated with stress, than in subsequent summers when marine traffic returned to normal levels.

“This is the first time that anyone’s documented any physiological effect – these are after all 50 tonne animals so they don’t make terribly easy things to study,” said Dr Rolland. “Past studies have shown they alter their vocalisation pattern in a noisy environment just like we would in a cocktail party, but this is the first time the stress has been documented physiologically.”

Precisely how much it matters to the animals is unclear. But ocean noise has risen substantially in recent decades along with the growth in global shipping; one analysis showed that the north-eastern Pacific is 10-12dB louder now than in the 1960s.

Past years have seen significant numbers of right whales hit by ships and entangled in fishing nets. In the Bay of Fundy, relocating shipping lanes away from the feeding grounds in 2003 has reduced ship strikes by 80-90%, while similar measures have been taken elsewhere along the coast.

The research team would now like to establish a study that could relate stress hormones to ocean noise in a range of locations. This could include studying the differences between the North Atlantic right whales and their close relatives in the southern hemisphere, the Southern right whales, whose numbers are increasing much more vigorously since the era of industrial hunting.