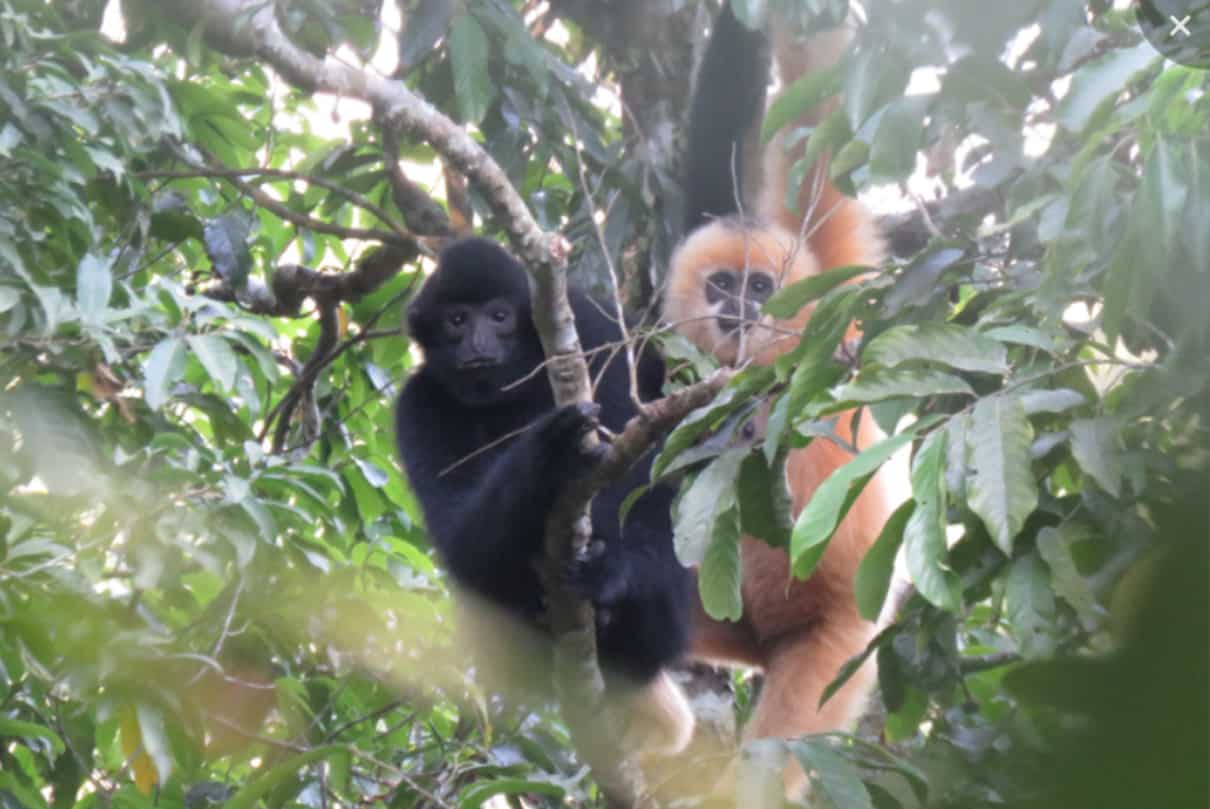 The Hainan gibbon was once teetering and tottering at the precipice of extinction.

In the 1950s, there were about 2,000 individuals living in Hainan, a tropical island at the southernmost tip of China, but 20 years later, poaching and habitat destruction nearly wiped the species out, leaving only seven to nine individuals.

With conservation efforts, the world’s rarest primate has been making a gradual comeback. More than 30 Hainan gibbons currently inhabit the island, and conservationists have recently made a big discovery: a male and female just formed a new family, which means the population might grow even more.

Until recently, the entire Hainan gibbon (Nomascus hainanus) population was isolated within a 1,600-hectare (4,000-acre) fragment of forest in the Hainan Bawangling National Nature Reserve.

But in October 2019, villagers first reported seeing a male and female gibbon 8 kilometers (5 miles) outside of their typical range.

In November 2019, community rangers heard the shrill, flute-like call of the male gibbon, and two months later, they heard the female hooting alongside the male in what researchers call a “duet.”

When a male and female perform a duet together, it signifies that their relationship has been established, according to Philip Lo, co-author of a report in Oryx about the new family formation.

“There are only five families of this species in the world, so every single new family formation is exciting news.”

Lo says he’s also hopeful about the couple’s move to a different part of the reserve, which is at a lower elevation and yields a higher abundance of figs, lychees and other fruits that gibbons like to eat.

“We didn’t know if they were able to expand their range outside that piece of forest,” Lo said. “It’s like putting all your eggs in one basket. We also didn’t know if their population was over the carrying capacity of that area, which would have limited the future growth of a population. So when we found this little family, we knew that they found a way to explore new, unused forest, which is quite significant for the future survivorship of the species.”

While human encroachment into gibbon habitat is quite rare now, villagers occasionally trespass into the reserve to collect non-timber forest products, which can be quite disruptive to the gibbons, Lo said. To ensure the species continues to thrive, the team at KFBG helped bolster local conservation efforts.

“Our key conservation measures include funding and training two gibbon monitoring teams, sponsoring researchers to study the species, conducting annual population census, planting the species’ favourite native food trees produced by a local nursery, promoting sustainable agriculture and conducting awareness raising activities amongst the local community,” Lo said in a statement. “With our concerted efforts, the population of Hainan Gibbon has been gradually recovering, with a third and fourth family group formed in 2011 and 2015, respectively.”

Since there are only about 30 Haian gibbons left in the world, genetic diversity is a concern. One study showed that genetic diversity in Hainan gibbons has been gradually declining since the 19thcentury, but experienced its sharpest downturn in the last 30 years, with genetic diversity decreasing by around 30% from its previous levels. Without variation in the gene pool, a species can experience poor health and fertility problems.

Despite this predicament, Lo and his team of researchers say they’re hopeful that the species will persevere, especially with the establishment of the new family. Once Hainan gibbons form a couple, they typically have a baby within a year, Lo said.

“We are quite optimistic about the future of this species,” Lo told Mongabay. “We want to cheer up other colleagues in the field. When they feel sad about extinction, [they can see] there’s still some hope for some species.”

This article by Elizabeth Claire Alberts was first published on Mongabay.com on 28 May 2020. Lead Image: The newest couple of Hainan gibbons. Image by KFBG.