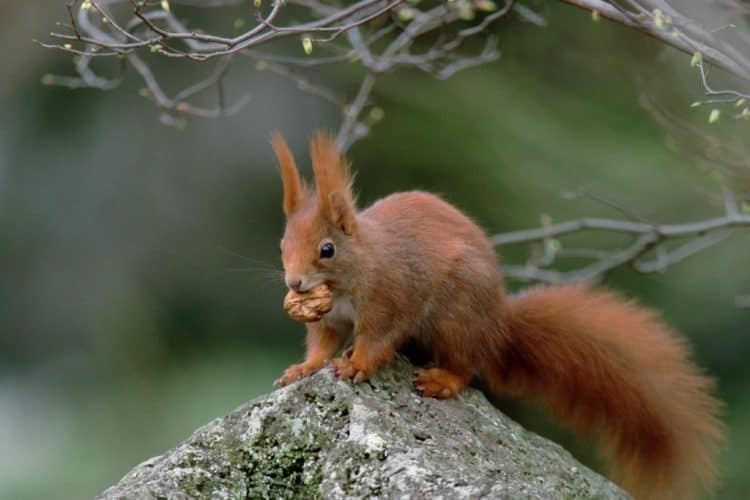 Gray squirrels may not look so smart when they’re frantically burying acorns they may never find again, but they appear to be smarter than the red squirrels found across the pond.

Ever since gray squirrels arrived in the U.K. from North America more than a century ago, numbers of Great Britain’s native red squirrels have begun to dwindle. Now scientists may have a clue as to why: Gray squirrels are better at problem-solving when it’s time for dinner.

The two closely related species share habitat and food sources, which makes them direct competitors. And gray squirrels’ craftiness may be helping them outcompete their smaller, reddish counterparts, researchers report in the journal Animal Behaviour.

During the past several decades, the plight of the red squirrel has grown especially concerning, leading the Red Squirrel Survival Trust to project that the species could go extinct in the U.K. within the next decade if numbers don’t reverse.

To figure out how gray squirrels are outcompeting their British cousins, University of Exeter squirrel behavior expert Pizza Ka Yee Chow studied the twitchy-tailed rodents at both her university campus and on the Isle of Arran, off Scotland’s West Coast. Chow and colleagues tested the squirrels’ problem-solving abilities using two different puzzles, one simple and the other more complex. If the squirrels solved the puzzles, they got a tasty hazelnut.

The easy puzzle simply required the squirrel to open a clear plastic flap to get the food. The difficult puzzle had several more steps, including operating a lever, before the squirrel got its treat.

Both species did equally well at the simple puzzle, although they used different strategies. Gray squirrels tackled the puzzle with short, repeated attempts, often changing up their tactics when they tried again. The red squirrels made fewer attempts but spent more time with the puzzle.

“Tree squirrels have a pretty varied diet and are very good at finding food wherever it might be,” says Thaddeus McRae, an animal behavior expert at Lee University who wasn’t involved in the study. “This kind of flexibility is especially important when they’re competing against other species of squirrel, making them very successful at invading.”

Over time, this ingenuity could have helped gray squirrels find better, more nutritious food, giving them an advantage in making more squirrels.

This article was first published by National Geographic on 21 Feb 2018.