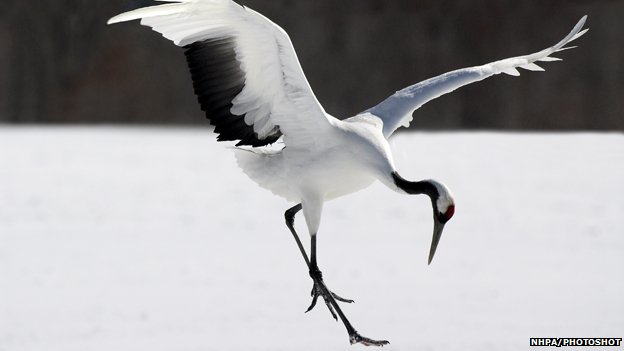 “Mesmerising and with a little bit of mystery about it.” That is how aviculturist Amy King describes the graceful leaping, bowing, running, spinning and grass-tossing of dancing cranes. This unique and spectacular behaviour has been imitated in various human cultures since the Stone Age and the purpose of such elaborate displays is widely understood to establish and reaffirm long-term pair bonds.

But on the occasion that young or single birds dance, for no clear social reasons, scientists become really intrigued. Curiously, all species of crane dance throughout the year and at any age. The behaviour can appear random at times: sparked by a feather, stick or gust of wind.

Explanations for this peculiar propensity for dance have included socialisation and pair bonding in sub-adults, averting aggression and as a displacement activity when nervous. But while these reasons could drive certain situations, they cannot explain everything.

Cranes dance most often when relaxed and at ease, often while not involved in any obvious social activity and when they are too young to form pairs; they will even dance alone. According to a publication in The International Journal of Avian Science (IBIS) the answer could be that most crane dances, outside of courtship, are for play
Five rules

“What came as a surprise was that nobody has figured it out before,” author Dr Vladimir Dinets from Louisiana State University, US told BBC Nature. To better understand the behaviour, Dr Dinets compared non-courtship crane dances to five criteria for determining what exactly constitutes play.

These categories, widely accepted by scientists, were proposed by Professor Gordon Burghardt in 2005 in his book The Genesis of Animal Play. According to Prof Burghardt, play is a repeated behaviour that should not contribute to survival, it is spontaneous and voluntary; performed when the animal is healthy and free from stress.

“They have become kind of a golden standard,” Dr Dinets said, “We know that play has evolved independently in many groups of animals, from mammals to octopuses, and that its occurrence correlates with complex and flexible behaviour.”

“[Play] could be a unique window into the evolution of complex behaviour, but so far we don’t know even the most basic things about it,” he said.

Professor Burghardt describes play as a “behaviour that doesn’t seem to be very adaptive or functional in the context in which you see it.” And for a long time it was thought that play was only found in mammals and a few birds.

“It is probably much more common than people think,” said Prof Burghardt. So why do animals play? There is no simple answer according to the expert: “It’s a behaviour that has arisen evolutionarily many times for different reasons and many different functions.”

“Like practicing skills that [the young] will need in adulthood and helping them cognitively.” For many species you only see play in young animals. There are exceptions: monkeys, apes, humans, wild dogs and turtles for example, where older animals play too.

Prof Burghardt explained that it is also more likely in animals where there is a period of parental care, where the young are protected from doing things seriously on their own to survive. “That’s why you find play much more often in mammals and birds,” he said.

Dancing cranes interested Prof Burghardt because adult birds, and not just chicks, exhibit this play behaviour. “Maybe one of the functions in cranes is that it helps keep the [long-term] pair bond exciting and interesting,” he said.

For Dr Dinets, “it solves the old mystery of what crane dances are, but since play is so mysterious, it just replaces one riddle with another.” Common cranes have now returned to parts of the UK, notably Norfolk, after a 400-year absence.

Other key places to see the spectacular performances are the Somerset levels and moors, where the Great Crane Project have been releasing captive bred birds since 2010.

If you are thinking about watching the dance of these distinctive birds then the project’s Amy King suggests dawn and dusk on a windy day when the birds “leap in the air and spin around, run and jump”. “[It] looks like they are having fun,” she said.

This article was written by Jeremy Coles and published by BBC Nature.

Just goes to show that dancing in any way we can is GOOD for all of us!

Cause it is evolutionarily good? 🙂 Must be a good way of keeping in shape. The cranes doesn't rely on the same abilities

Of course they’re having fun, That’s the Whole Point! Or why else do you think ferrets do “Weasel War-dances”? 🙂