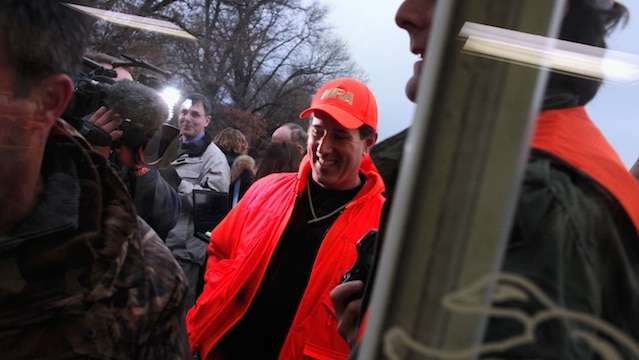 Opting not to hunt for votes one day after Christmas, a gun-toting Rick Santorum went on a different kind of hunt on Monday. The black pheasants, quail and chukars set in his sights didn’t have a chance. “I had four clean kills and then I had some group kills,” the Republican presidential candidate boasted after a bird hunt in Adel, Iowa. He was clad in a neon-orange jacket, vest and hat emblazoned with “NRA,” for the National Rifle Association.

“Well, the day after Christmas is not a particularly good day to do a lot of town hall meetings,” Santorum said. “So I just thought we would do something that was fun, something that I enjoy doing – I know the folks here in Iowa enjoy doing also.”

“So we go out and first bird up – boom. [Son John Santorum] knocks it right out of the air,” the beaming candidate said of his son’s first time hunting. “So congratulations, John.”

The result: wild game that Santorum would eat with his family and a chance to mention how his children got guns for Christmas. But perhaps most important, the occasion offered a photo op of a gun-toting, NRA-backed, bird-hunting conservative that could be tantalizing to conservatives ahead Iowa’s Jan. 3 caucus.

It didn’t hurt that his hunting buddy was Iowa Republican Rep. Steve King. King’s endorsement is coveted by the GOP presidential field, though he did not offer one Monday. Santorum is struggling to gain more attention and approval from Iowa voters. His poll numbers are mired in the low digits despite his having visited all 99 of Iowa’s counties.

That could explain why birds were not the only topic of discussion. The candidate took on those people who many conservatives believe want to weaken the Second Amendment’s constitutional right to bear arms. “There’s nobody who’s done more for the Second Amendment – and has been stronger on that issue – than I have,” Santorum said. “You know, we have an A+ rating from the NRA.”

Just after, King said: “I just want to enforce that, all of our constitutional rights – if we don’t exercise them, we will lose them. And say if no one picked up a gun and used a gun – and waited until we needed an armed militia – then, by then, we would have already lost our gun rights, because the liberals redefine them out of existence.”

When asked about his GOP rivals, Santorum was also critical. “As we know, the governorship of Massachusetts – and (former Gov.) Mitt Romney even said – you know, he had to just basically do whatever the Democrats wanted to do and a little less,” Santorum said. “And you know, (Texas) Gov. (Rick) Perry is, you know, is from a state that we all know the lieutenant governor has more authority in the state than the governor has.”

“So as far as really being able to lead, I think if you look at leadership ability and being able to get things done in a tough environment, we’ve got it hands down over the field and I feel very good about that.”

Going further, Santorum said his campaign has momentum and he offered an analogy. “There’s really three primaries going on here. There’s the libertarian primary, which Ron Paul is going to win. And then you got the moderate primary, which Gingrich and Romney are scrumming for. And you’ve got three folks who are running as strong conservatives,” Santorum said, referring to himself, Perry and Minnesota Rep. Michele Bachmann.

“And I think if we win that primary, I think we are in very good shape – as the non ‘Newt Romney.'” The candidate even jokingly compared his success at bagging birds to his potential success at the ballot box.

“It’s a primary versus a caucus, or even a general election, in some respects,” Santorum said, referring to his ability to nab not just one type of bird, but differing varieties of pheasants, quail and chuckars. “Because you have moderates, liberals and conservatives. As opposed to just conservatives,” he added. “I’ll let you guys figure out the bird apportionment.”

“boo” to all of you, buddy! But most especially “boo” to you, Mr. Santorum who believes in killing fellow critters who can not shoot you back.