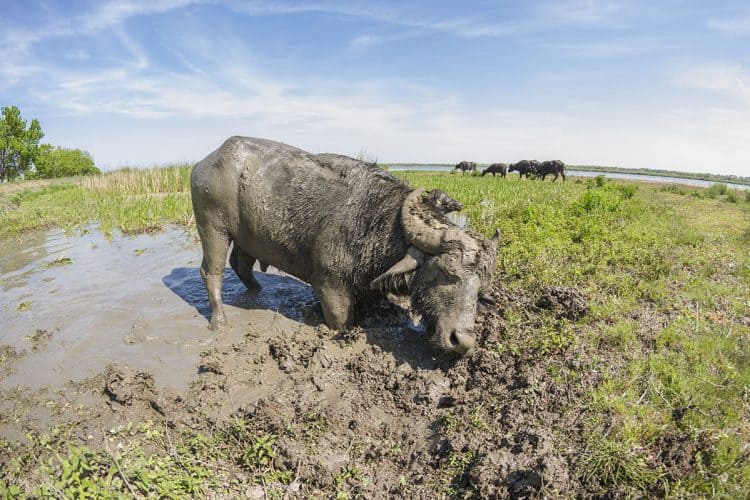 At the end of a long day, Michel Jacobi, 36, rides a water buffalo home. The choice of commute is unique even in rural, Trans-Carpathian Ukraine — though it wasn’t always.

Jacobi, a native of Kiel, Germany, with a degree in ecology and forestry, has spent nearly a decade in Ukraine, raising a sizable herd of domesticated water buffalo (Bubalus bubalis), starting an NGO, and living off the sale of their rich and hypoallergenic yogurt and cheese. But these animals aren’t livestock to Jacobi; the relationship is intimate.

“They produce an atmosphere of coziness and deep-rooted trust,” he says. “All this is only possible, when you admit them to be part of your life and let them be real domestic water buffalo.”

This summer, Jacobi said goodbye to 17 of his animals. He wasn’t selling them for slaughter, but giving them to an ambitious rewilding project to employ these animals as ecosystem engineers on the Danube River in Ukraine.

In mid-May of this year, officials released seven of Jacobi’s water buffalo onto the 3,500-hectare (8,650-acre) Ermakov Island on the Danube. Ten more followed soon after. One was pregnant and has since given birth to a healthy calf, raising the number of this little population to 18 in total.

Katya Kurakina, the communications manager at Rewilding Ukraine, a branch of the NGO Rewilding Europe, says the animals are adapting well to their new island home.

But their arrival here is a part of a long and complicated history of water buffalo in Europe.

When humans first arrived from Africa into Europe some 45,000 years ago, they encountered a fauna wholly different from today, including cave hyenas and lions, woolly mammoths and rhinos, as well as aurochs and water buffalo. Yes, water buffalo. During the Pleistocene, Europe had its very own species of water buffalo, known as Bubalus murrensis.

The animals lived near many of Europe’s major rivers but vanished sometime in the late Pleistocene or early Holocene. Whether they were killed off by overhunting from the incredibly lethal new arrivals —Homo sapiens —or climatic and environmental changes, we simply don’t know. But they were here — and not that long ago, geologically speaking.

Still, this doesn’t mean Rewilding Europe is interested in pretending that it’s bringing back antediluvian ghosts.

“We are not talking about bringing back the extinct species,” Kurakina says. “We aim to find a solution to replace the extinct megafauna with the species that carry on the same biological functions in the ecosystems.”

When the last European water buffalo died they took with them a wholly unique place in the ecology of Europe, one that can be at least partially replaced today, the NGO argues, by rewilding with domestic water buffalo.

Domestic water buffalo have been used in Eastern Europe for hundreds, if not thousands, of years. These animals came from the Indian Subcontinent and Southeast Asia, where the last surviving species was domesticated. Today, the wild water buffalo (Bubalus arnee) is listed as Endangered by the IUCN Red List, imperiled by interbreeding with domestic cattle, hunting in some countries, and habitat loss. This Asian species is likely the ancestor of the millions of domestic animals today.

Jacobi says the first water buffalo in Europe were brought here by Pannonian Avars, a group of somewhat mysterious Eurasian nomads who first arrived in the region in the 500s, shortly after the collapse of the Western Roman Empire. In many communities across Eastern Europe, water buffalo were a common scene even into the 20th century.

But upheavals — political and economic — during the last hundred years nearly wiped out the Carpathians’ distinct domestic breed.

“[Water buffalo] are almost out of use. Just few dozens of animals are probably left in the household in Carpathians,” Kurakina says.

The water buffalo suffered under Communism, according to Kurakina. When the Soviets collectivized farms, the water buffalo lost their historical role in local communities and were brought together in massive herds, where Kurakina says they proved difficult to manage. Mass slaughter followed.

Jacobi says the transition to a free-market economy during the 1990s led to the slaughter of the remaining animals, which were not easily commoditized. When he came here ten years ago, the animal was almost gone.

The future of water buffalos in Ukraine, among other European countries, looked like one of extinction through obscurity.

Today, though, there are glimmers of change.

Rewilding Europe decided to reintroduce a small herd of Jacobi’s water buffalos into the Danube for a number of reasons. First, they hoped it would draw tourists eager to see the massive, majestic animals — a bit of their lost megafauna reimagined — but more importantly, they believed the water buffalo would become engineers, enlivening the river.

Water buffalos, as their name suggests, are adapted to wet areas, the Asian species often found in river deltas and marshes. They can survive in river basins far better than regular cattle, making hay with even low-quality vegetation. These animals, which weigh from 270 to 450 kilograms (600 to 1,000 pounds), also create space for little things; they are biodiversity and abundance creators.

“These animals are one of nature’s great engineers,” Rewilding Ukraine team leader Mykhailo Nesterenko said in a press statement. “As large bovines they open up the scrub and reedbeds, creating pools and puddles which are home to many insects, amphibians and fish.”

They also spread seeds far and wide. According to Nesterenko, the water buffalo can disperse more than 200 plant species either via their hair or their droppings.

“We expect these magnificent animals to create habitats in the Danube Delta which no other living creature could,” he said.

Ermakov Island is the perfect habitat for these mega-water-loving-herbivores. Ten years ago, various organizations broke down dikes, allowing the island to undergo seasonal flooding. Now with the addition of water buffalo, this little corner of the Danube may see changes in its ecosystem that haven’t occurred in 10,000 years.

“When we mimic nature we can even reverse desertification and store carbon dioxide with buffalos,” Jacobi says.

“Overall this is an experiment and we are also curious [to see the] results,” she says.

This isn’t the only project using water buffalo in Europe for rewilding. A small herd was released in Germany in 2011. But this is the first project in Ukraine and the first that involved Jacobi, the water buffalo whisperer.

None of this would have happened without Michel Jacobi, whose discourse sounds more like that of a philosopher or poet than a rural farmer.

“You know,” he writes to me, “I see more hope in changing an innocent child than an old white patriarchic man earning his wealth by externalizing and colonialism and calling himself peaceful.”

Jacobi saw his first water buffalo while hiking through the Carpathian Mountains in 2004. The way he tells it, he was on a mission “to learn about small-scale farming” and a desire to integrate a “task” related to ecology and sustainability, while living a life largely independent of fossil fuels: something,he says, that’s no longer really possible in Germany.

When he discovered that this distinct breed of water buffalo was vanishing from the Carpathians, the young twenty-something found his mission.

He moved from Germany to Ukraine and began to collect disparate buffalo. He says most of the animals he gathered together were “traumatized.” Farmers, increasingly unfamiliar with the species, had treated them like cows, not water buffalo.

Jacobi says he could only find “a few very old ladies” who remembered “how to treat [the water buffalo] right.”

“The secret is patience,gentility, not violence,” he explains. “Like this, I spend lot of time with them. I became a shepherd, a friend, a student and finally part of the herd. I still do not use them for work. With me they are semi-wild and I protect the population against economic capriciousness.”

Despite water buffalos’ reputation for being fierce and volatile, Jacobi finds them highly intelligent and communal.

“I have been interested in ethology [the study of animal behavior] all my life and got fascinated right away by the multiplicity of communication and social interaction of this so-called primitive domestic breed,” he says.

He says water buffalo are more like elephants than cattle.

“Buffalo never forget, they life up to 40 years and I have a very deep relation with most of them,” he says. “I try not to force them too much, I try to learn from them and listen. They are so old and so deep, they resona[te] still from a different time, we now may call Saharasia or know it as Arcadia, where the worship of Panbegan.”

Pan, of course, is the ancient Greek god of shepherds, including their music and their montane haunts. Part goat and part man, it may be said that Pan represents a kind of human-animal symbiosis. Pan is believed to have first been worshiped in Arcadia, a region of the Greek Peloponnese and a word that has become synonymous with a lost utopia or golden age.

Jacobi may have come to the Carpathians to rescue this rare breed of water buffalo, but he has since taken on other projects, including attempting to breed Tarpan horses and “breed back” the Mountain Rishca Cow of the Carpathians.

He says he learned much more than he anticipated.

“What I found is a much older community structure teaching me the real way of life,” he says.

He declines to call himself a “hermit” — he is, after all, on Facebook and YouTube, very active with the local community, and accepts volunteers — but says he “can’t stand the alienation” of the modern world.

“I cannot stand the contradiction between [the]Age of Enlightenment and [the] modern lifestyle; it feels like a backflip,” he tells me. “The modern world wants to be taken so seriously but is not sustainable at all.”

Jacobi has instead forged his own path, at once disconnected from the modern world and connected to something older, something, perhaps, pastoral and mythological. And he’s making it work — and, at the same time, providing a chance for the water buffalo of the Ukraine.

When the dawn comes, you can see Jacobi riding one of his chosen buffalo along with the rest of the herd up the Trans-Carpathians. And a thousand kilometers away, as the sun comes up over the Danube, their relatives graze among the reeds, the tadpoles, and the river.

If you blink, maybe this could be another world. A couple of hundred years ago. Or maybe twenty millennia. Whatever it is, Michel Jacobi and Rewilding Europe are creating an unexpected future.

This article by Jeremy Hance was first published on Mongabay.com on 21 October 2019.