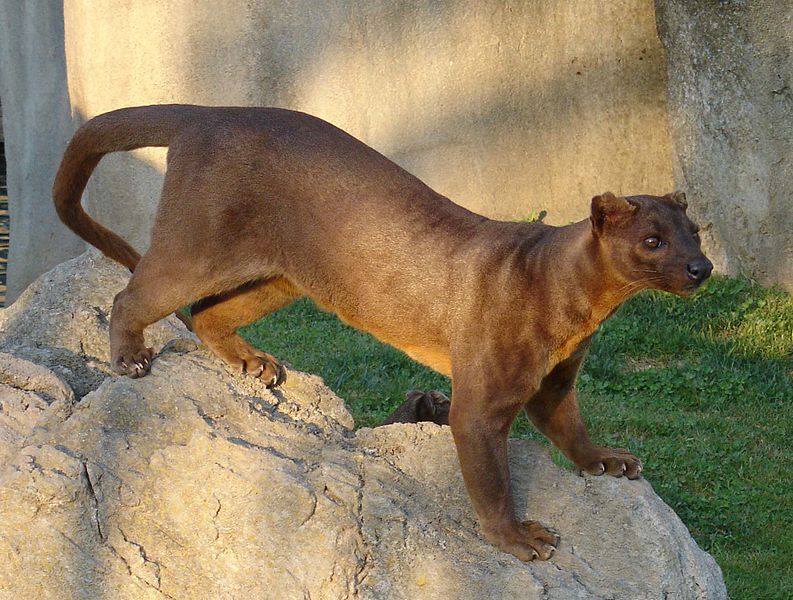 Unfortunately for fosa, their first major big-screen appearance came in the form of the fictitious villains in the widely popular 2005 animated film, Madagascar. Most people don’t realise that these strange cat-like creatures are alive and living across Madagascar today, however.

It is an elusive, revered and mostly feared carnivore that evokes memorable stories in Malagasy folklore. They’re distributed widely across Madagascar and are currently facing an array of pressures, most notably habitat destruction and retaliatory killing for poultry depredation.

Fosa are members of Madagascar’s only endemic carnivorous group, the Family Eupleridae. Comprising ten species, this group is one of the least studied and most threatened groups of carnivores worldwide. Eupleridae consists of species that vary both morphologically and behaviourally, from the strange earthworm- and insect-eating falanouc to the more commonly seen rainforest carnivore, the ring-tailed vontsira. Of these carnivores, fosa have received the most attention, and with good cause.

Despite fosa’s claim to being ‘kings of the jungle,’ they face a difficult future. Deforestation has reduced Madagascar’s primary forest to less than 10 percent, with much of it fragmented and bearing signs of degradation and human intrusion. This has largely been the result of slash and burn agriculture and small-scale logging. Selective logging for precious woods, such as the prized rosewood, is an equally intrusive and damaging threat. These significant reductions in the quantity and quality of remaining forests create a particularly detrimental scenario for fosa, on two fronts.

Although relatively small for an apex predator, research has revealed fosa to occupy particularly large home ranges at low population densities. This scenario promotes dependence upon large swaths of continuous forest, which unfortunately leaves them particularly susceptible to deforestation. Given the severe reductions in forest cover, it has been suggested that many of Madagascar’s remaining forests are unable to support long-term sustainable populations.

These large-scale reductions in forest not only reduce fosa habitat but also promote increased interaction with humans. Madagascar’s population has grown rapidly in recent decades and has nearly reached 23 million, with two-thirds living in rural areas. This demographic live mostly as subsistence farmers, the poorest socio-economic group, and derive their livelihood principally from the surrounding landscape. This combination creates a potential hotbed for negative encounters between predatory carnivores and farmers’ livestock.

Not dissimilar to lions’ depredation of cattle across continental Africa, fosa commonly attack rural Malagasy poultry, often resulting in fatal consequences. It’s easy to understand why fosa venture into villages fringing their forests. Free-ranging chickens and ducks are a common site across these villages and pose easy prey. Even though poultry are locked inside coops during the evenings, the coops’ shoddy construction offers little protection against a prowling fosa.

Unfortunately, when fosa attack poultry inside coops they’re often unable to escape and are killed during the furor created by startled poultry and dogs. Consequently, it’s not uncommon for several fosa to be killed annually within villages near forests. When considering fosa’s life-history characteristics, seemingly innocuous mortalities may pose real threats to their long-term existence.

From a utilitarian perspective it is widely accepted that not all species are created equal. Some species, relative to their abundance, have a disproportionate effect upon the surrounding ecosystem. Such animals are called keystone species. The fosa could be considered one of these important species. Despite their low populations, they exert a significant influence upon the ecosystem through their top-down predation. From lemurs and birds to tenrecs and reptiles, the fosa eats catholically, and it’s such predation that keeps the ecosystem in harmony, ensuring no one species is too great in number.

Fosa are not only likely to be keystone species, but their large home range requirements make them an even greater conservation tool. Species like the fosa whose conservation requires the preservation of large areas of habitat have become known as umbrella species. When considering male fosa can require up to 50 square kilometers (about 19 square miles) during the mating season, effective conservation of a long-term sustainable population requires the preservation of huge areas of forest — and if managed successfully, all of the other species within, as well.

All of this is obviously stated with caution. Recognising fosa as important species and utilising them as a conservation tool does not negate our responsibility to ensure effective monitoring of other vulnerable species and ecosystem interactions. It does, however, provide conservationists with a simpler method in creating targets, monitoring, and evaluating their success against one species, in place of an ecosystem. And, dare I say it, a pretty cute species at that.

This article was first published by Mongabay.com on 05 Jul 2016.

The best thing for Madagascar is to move the human population OFF the entire island. And KEEP the humans off. We are the worst, most destructive "invasive" species there is.

'Moving on' where, to the moon? Need functioning ecosystems to sustain the web of life. If not, in the end we're all going down w/ the (planet) ship.

Have to say, dont share ur lament, nor in the least feel alienated.

Says here that Fosa are 'keystone species,' who through their top-down predation keep the ecosystem in harmony ensuring no one species is too great in number. Madagascar’s human population however has grown to nearly 23 million, with 2/3's intruding on all surrounding landscape. If humans can be considered another keystone species, all this theory is worthless as far as maintaining ecosysystem harmony. Also human pop. continues to grow ad infinitum. Projected to add another 2 bil. globally within next 35 years. Which makes all this yak, yaking absolutely meaningless.

I couldn't agree more but as a women if you admit that you never wanted children you can be alienated ! Its Ok for men not to want them apparently .

Without long term population control of the human race, the entire world is at risk of complete degradation and elimination of all species apart from Rats, ants and cockraoches, we will surely doom everything in the name of protecting the human race, It was said in the matrix movie, the robots said the humans are like a vrus, spreading and multiplying out of control and consuming everything around it and then moving on, sad but true,