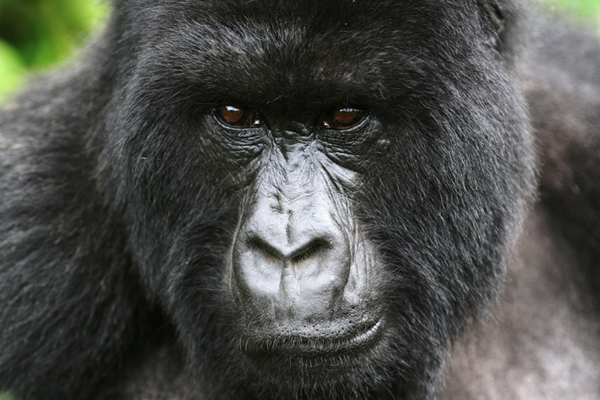 The sunlight poured through the canopy, casting dappled shade over Makara, a large silverback mountain gorilla, as he cast his eyes around the forest clearing, checking on the members of his harem. A female gorilla reclined on a bank of dense vegetation of the most brilliant green, clutching her three day old infant close to her chest, and elsewhere, two juvenile gorillas played around a small tree, running rings around it until one crashed into the other and they rolled themselves into a roly-poly ball of jet black fluff that came to a halt a few meters in front of our delighted group.

I was part of a select few tourists permitted to visit this particular gorilla family, known as the Habinyanja group, whilst on safari in Bwindi Impenetrable National Park in Uganda. Gorilla trekking in Uganda and Rwanda has rapidly become one of life’s ‘bucket list’ wildlife encounters. It is also become the key to the survival of the species—as long as it is conducted responsibly. Gorilla tourism has helped mountain gorillas (Gorilla beringei beringe) make a successful comeback from the very brink of extinction. By the mid to late 1970s, their population plummeted to less than 400 individuals across their last surviving habitats in Rwanda, Uganda and what was then Zaire (now the Democratic Republic of Congo). Increased interest in their conservation, coupled with the advent of gorilla tourism in the 1980s and 90s, populations increased steadily. Last year, the results of recent census studies confirmed the total population for mountain gorillas was now at 880 individuals, split across the two distinct locations of Bwindi Impenetrable National Park and the Virunga Volcanoes, the latter comprising three different conservation areas across Rwanda, DRC and Uganda.

Gorilla trekking has not only become a vital conservation fund-raising tool—in Uganda, gorilla tourism contributes approximately 80% of the national wildlife authority’s overall budget, thereby financing the bulk of wildlife and habitat conservation across the country as a whole—but it has also turned the gorillas into a valuable commodity prized by local communities and government alike. These gentle giants provide much-needed funding for local infrastructure and a source of employment on both a local and national level, as well as playing a catalytic role in these countries’ nascent tourism industries. While a typical gorilla tourist’s main objective is to encounter the gorilla, they end up visiting other parks and attractions in the region as well. Tourism has become a major player—according to the Rwanda Development Board revenues have almost doubled in the last five years and tourism now accounts for 7.8% of Rwanda’s GDP and growing. The World Wildlife Fund has recently estimated that each gorilla brings in USD $1 million in revenue each year for Uganda. On the very simple premise that nobody likes to kill a cash cow, this alone appears to bode well for their survival.

Despite this, it does seem that hunters’ snares are ever present. Poachers are not always after the gorillas themselves, as most snares are laid as part of the illegal poaching of smaller game such as duikers—dainty little forest antelopes. Tragically though, inquisitive young gorillas often find themselves caught in snares intended for another species. In the first few weeks of 2013, the Gorilla Doctors, a veterinary team providing the gorillas with medical care in Rwanda, Uganda and DRC, performed four medical interventions on gorillas trapped in snares. One intervention was for a juvenile male gorilla called Kajeyo from the very group I had visited—the group’s trackers had noticed the snare wrapped around the young gorilla’s arm when they visited the group with tourists the day before. The operation on Kajeyo went well, but not all gorillas survive snare injuries—and with around 1,200 snares found and destroyed in Volcanoes National Park in Rwanda last year alone, it remains a very real threat.

Political instability is another factor. Uganda and Rwanda may have experienced steady growth in tourism once they were able to put their respective troubled pasts behind them—but the DRC has not been so lucky. Violent conflict in the eastern regions of the Congo is impacting the ongoing conservation of their gorillas.

According to Jessica Burbridge, of the Gorilla Doctors, since the M23 rebels have moved into the area inhabited by the apes on the Congolese side of the border, “Insecurity in Eastern DRC has limited our ability to monitor and treat gorillas in Virunga National Park.”

Ironically, health risks to the gorillas have increased with the growth of gorilla tourism. Sharing 98% of our human DNA, mountain gorillas are very susceptible to contracting human illnesses. Strict ‘gorilla etiquette’ rules apply when tracking, including observing a minimum distance of 7 meters and preventing anyone from tracking if they have a cold or other transmittable disease. Nevertheless, it is not unheard of for gorillas to break the rules themselves, and approach human visitors. Sometimes rangers will advise you to step back, and sometimes there is little you can do to avoid contact. Let’s face it—if a two hundred pound silverback decides he wants to ruffle your hair, there is little you or anyone else can do about it.

It happened to one of our clients, in a chance encounter with a gorilla group passing through the gardens of his lodge. His experience was captured on video and used to promote African Wildlife Foundation, one of the major long term supporters of gorilla conservation, yet the inadvertent close contact seen in the film initially raised a few eyebrows in conservation circles.

The truth is, whilst Gorilla Doctors have identified the cause of death for some gorillas as infections that have originated as human viruses, they have not been able to say whether these came from the local community or visiting tourists. Equally, gorillas also have their own viruses and bacteria. Currently, the team is collecting samples from the Sabyinyo group in Rwanda, who recently suffered a serious outbreak of respiratory illness. They may never ascertain the origin of this particular family’s problems, but there is an ongoing debate about whether tourists should don surgical masks when trekking gorillas in order to minimize the chance of passing on any contagious diseases.

But the long term survival of the species is not (if you’ll pardon the pun) out of the woods yet. According to Alastair McNeilage of the Wildlife Conservation Society, the population of 400 gorillas in Uganda is still critically small, “Bwindi is one of the best protected national parks across Africa but it’s a very small island of isolated forest surrounded by some of the highest rural human population densities in Africa. Most scientists would say that a minimum population of 500 breeding individuals is needed to be sure of their long term viability.” Even though recent census results do paint a positive picture, the long term future is still very uncertain.

McNeilage believes the impact of climate change could have devastating effects, as farmers seek land at increasingly higher altitudes. Current estimates indicate that by the end of the century, growing conditions for a particular crop will have risen around 700 meters in altitude, so there is likely to be plenty of demand for land higher up the mountainous slopes of Bwindi or the Virungas. He is a firm supporter of gorilla tourism, highlighting the importance of nurturing sustainable, high-end tourism in order to justify maintaining these areas as forest habitats for the gorillas.

The survival of the mountain gorilla, as both a critically endangered species with which we share a very special kinship, and as a significant pillar of the local and national economies, is increasingly important. It is naïve to think the challenges that these gentle giants face will disappear—indeed they have arguably multiplied in scale and number since gorilla conservation began—but responsible gorilla tourism, that benefits both the wildlife and the communities that surround it, could be the very salvation of this incredible species.

The author would like to thank the Rwanda Development Board, Gorilla Doctors, Alastair McNeilage of the Wildlife Conservation Society and Professor Wilber Ahebwa of Makerere University in Uganda, for their help and support when writing this article.

About the Author: Anne-Marie Weeden first fell in love with Africa when she drove a small pink 2wd van all the way across the Sahara for charity. After years of taking every opportunity she could to travel the continent, she left the ‘day job’ in London to move to Uganda with her partner, where she has tracked gorillas, darted rhinos, hand-fed giraffe and learned how to speak chimp. She now works for Journeys Discovering Africa, helping to provide tailor-made wildlife safaris to East Africa, including gorilla trekking tours in Uganda and Rwanda.