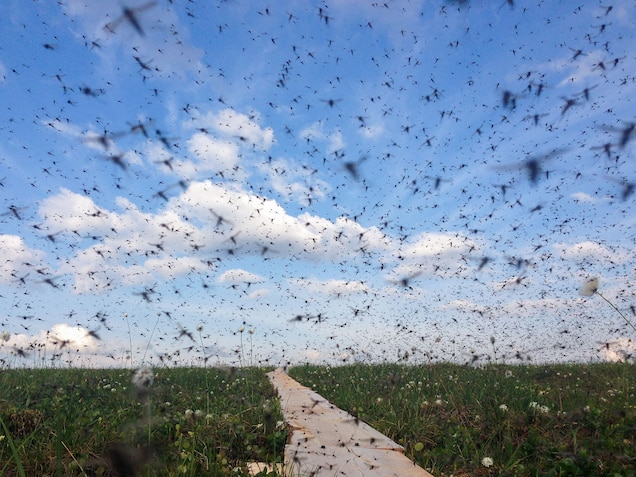 When the wind drops and the endless summer sun bakes the ponds that dot the frozen tundra, some of the Arctic’s most ferocious predators emerge and form menacing blizzards that darken the horizon – and everyone’s mood.

“It is the talk of the town when the Arctic mosquitoes are out,” says Lauren Culler, a postdoctoral researcher who studies insects in Greenland for Dartmouth College’s Institute of Arctic Studies.

“There aren’t a lot of animals for them to eat in the Arctic, so when they finally find one, they are ferocious. They are relentless. They do not stop. They just keep going after you.”

Climate change, it turns out, may make that even worse.

Large, blood-sucking mosquitoes already are the bane of people, caribou, reindeer, and other mammals eking out a living in the frozen north. But as temperatures warm, mosquitoes above the Arctic Circle emerge earlier, grow faster, and survive as winged pests even longer, according to Culler’s new research, which was published Tuesday in Proceedings of the Royal Society B.

There aren’t a lot of animals for them (mosquitoes) to eat in the Arctic, so when they finally find one, they are ferocious. They are relentless. They do not stop.

If Arctic temperatures rise 2 degrees Celsius, the study predicts, the probability of juvenile mosquitoes surviving to adulthood could increase 53 percent. Unlike tropical mosquitoes, Arctic species don’t carry human diseases. But the change could spell trouble for caribou and upend the ecology of the tundra, where mosquitoes pollinate plants and provide food for birds and other insects.

During two recent field seasons in Greenland, Culler found that with the Arctic already warming twice as fast as the rest of the globe, ponds and lakes on the tundra are melting up to several weeks sooner. When that happens mosquitoes take wing earlier.

“It was really when the pond thawed that triggered the hatch,” Culler says. “That’s not unexpected. Lots of biology is triggered by these melting events.”

But she also found that warming allowed the insects to develop faster, which had a huge impact on survival. Mosquitoes are most vulnerable in their early life stages, when they are easily gobbled up by diving pond beetles. Even though these beetles, too, are growing faster and eating more, mosquitoes still managed to make it to their adult stage in greater numbers.

“The faster they go through these life stages, the better off they are,” Culler says. “If you’re only exposed for 20 days instead of 24, that’s good for you. That’s four days you don’t have to worry about being eaten.”

Arctic mosquitoes typically emerge all at once in massive swarms. (That’s one reason they are jokingly called “Alaska’s state bird.”) It can be hard to overstate the scale. One of Culler’s colleagues in Greenland was assaulted by more than 100 mosquitoes at once. And the bugs in that region were mild for the Arctic. “You can be completely covered in a matter of seconds,” Culler says.

But what is mostly an annoyance for humans can threaten entire populations of other animals. When these insects attack caribou or reindeer en masse, the mammals run to snowy or icy areas or a windy ridge to escape the onslaught. The more time they spend fleeing swarming insects, the less time they spend eating. Previous studies have shown caribou and reindeer populations drop when insect harassment goes up, and many of those populations are already in decline.

Some Alaskans jokingly refer to the mosquito as “Alaska’s state bird.”

Plus, the earlier ponds melt, the more closely aligned the emergence of mosquitoes is with the birth of caribou calves. A mosquito’s ability to reproduce depends on the adult female finding blood to slurp. Because the birthing period limits the the caribou herd’s ability to flee, that provides female mosquitoes with an even greater supply of mammal blood.

This article was first published by National Geographic on 15 Sep 2015. Lead Image: Mosquitoes fill the air outside the Toolik Field Station in Arctic Alaska. Climate change may make mosquitoes throughout the Arctic more numerous. Photograph by Jesse Krause.