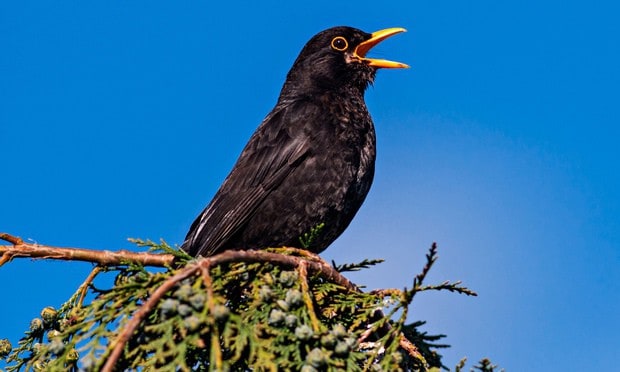 I arrived home the other evening at dusk after a long journey, and stepped out of the car to hear a shouting match between blackbirds, one of the most beautiful sounds in nature.

In the still calm of a clear March evening three males were fiercely staking their suburban territories, belting out sweet and flutey warblings, and in doing so, they lifted my travel-numbed mood with a shock-to-the-heart statement that spring was finally here.

I could pick out two of them silhouetted on a rooftop and fence, but I didn’t really need to – I’ve recognised that sound since school days, when my biology teacher took us out on the streets to map all the blackbird territories near the school.

Those ear-opening lessons marked a turning point in my life. They made me a touch wilder – and stoked a curiosity that led me to study biology and ecology at university, eventually completing a PhD on ducks.

My first job was doing fieldwork in Oxford’s Wytham Woods, where I was taught to recognise common bird songs by my boss. It opened up a whole new dimension to the outside world. By tuning into the sonic landscape I could start to understand not only who was around, but also what they were up to. An alarm call might indicate that I had been spotted, or alternatively that there were more real threats in the vicinity. Now I could share in the drama, with all the excitement and feelings of wildness that it entailed.

I was becoming immersed in the natural landscape, rather than feeling like a tourist somewhere. Learning any language can unlock so much about a place: its inhabitants and their personalities; its culture, history, and any dangers. I found that exactly the same applies to a natural environment – it becomes far more interesting and engaging if you can understand what is going on around you. And as I became more wrapped up in all the frenetic springtime activity happening in the woods, I started to appreciate it more.

As increasing numbers of us live in cities and spend most of our working lives indoors, is it very easy to become disconnected from the natural world. Research shows that rising levels of background noise from traffic and other human activity are making people oblivious to natural sounds, because we are quite simply screening it all out. We are conditioning ourselves to ignore the information coming into our ears, and as a consequence we are losing the ability to engage with the environment in the way we were built to.

I believe we should be taught to recognise birdsong from an early age, starting in our own gardens or schoolyards, because if we are wired into the natural environment we will grow up with an instinctive awareness of its importance to us. Birdsong is well known for its calming effect, perhaps because it reminds our ancestral brains that we are in a safe and predator-free place, or simply because it tells us that the world is still working. But I am not just talking about feeling better after a long journey; rather the fresh water, clean air, flood protection, food and countless other vital services we expect from nature every day.

Because people have been watching and monitoring birds for so long, they provide us with a stark indication of our impact on the countryside. From 30 years of data over 25 countries, scientists estimate that there are now 421 million fewer birds in the skies of Europe than were in 1980. Bird decline points to losses of habitat and gaps in the food chain, and we risk losing ever more unless enough of us feel like nature is of direct relevance to us. An emotional response to birdsong is a useful reminder of its relevance.

You already know some common bird songs and calls. Everyone knows what a herring gull sounds like – think of the added atmosphere that brings to a trip to the seaside. Or the twit-twoo of a tawny owl – it is undeniably exciting to hear that sound at night. The best thing is that it takes virtually no effort to learn the songs of a few of our most common birds, and you don’t need to be out in the countryside – gardens contain much more diversity than modern farmland. The most common birds are chatty little things, much more easily heard than seen.

Start by opening a window. You will recognise the pretty nasal twittering of a robin even if you didn’t realise where it came from, and likewise the mellow fluteyness of a blackbird. Listen for the two-tone “teacher-teacher” of the great tit. Once you have learned a few songs you can start to pick out the unfamiliar ones, which makes those easier to learn in turn.

Birds and their songs link my two lifelong interests of music and nature. As I finished my doctorate on ducks, my band Stornoway recorded our first album Beachcomber’s Windowsill, and our new album Bonxie is named after the Scottish colloquial term for the great skua. It opens with the sound of brent geese and contains field recordings of about 20 other species of birds including skylark, snipe, grouse, greenshank and curlew.

If you are thinking of learning a foreign language, why not consider learning a local one first: the language of your own garden and countryside. If birdsong was taught in our schools like French or German, we would have a new generation of wilder children. And this might increase the likelihood of them growing up to enjoy the same quality of wildlife that we can.

This article was first published by The guardian on 09 Mar 2015.