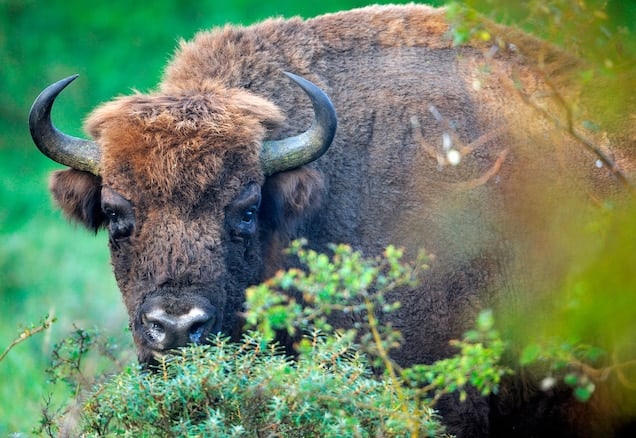 European bison went extinct in the wild in 1919, but now a few thousand are back, grazing in forests and on plains in a handful of countries.

The first four of a group of 11 animals – Europe’s largest living land animal – were reintroduced into state forest land in the Netherlands earlier this month.

Fenced inside an area about 1,500 hectares in the southeastern province of Noord-Brabant, the European bison (Bison bonasus) herd will eventually serve as a breeding stock to supply efforts to “rewild” other parts of the continent, says Frans Schepers, the managing director of the Netherlands-based nonprofit Rewilding Europe. The group oversees breeding of the bison, based on animals that lived on in zoos after they were wiped out in the wild.

This latest project marks the second reintroduction of bison into the Netherlands, with the first taking place in the Kraansvlak nature reserve in the province of Noord-Holland in 2007.

The species has been selected for such rewilding efforts because of the important role it plays in establishing the ecosystem of Europe’s forests and plains, Schepers notes. (Learn more about rewilding in the U.K.)

“Rewilding is not just about putting animals back,” says Schepers. “It’s about allowing natural processes to take over as much as possible.”

Bison serve important roles in cropping and fertilizing grasses, which then become food for deer and many other animals. Bison also serve as an important food source for wolves and other predators and for vultures when they die.

That’s why Rewilding Europe and other partners have been slowly introducing bison into pockets of Europe over the past few years. Out of about 5,000 of the animals left in the continent, about 3,500 now live in wild or semi-wild places. The largest herds are in Poland and Romania, but scientists hope they can gain footholds in other areas. As of now, there are more wild black rhinos in Africa than wild bison in Europe.

Other keystone species being similarly targeted for reintroduction include beavers, which shape wetlands; red deer and wild horses, which shape forests and plains; or even extinct aurochs, the wild precursors to modern domestic cattle.

To Schepers, such efforts are not about bringing back the past. “Our point of reference is oriented toward the future,” he says. “People have influenced nature, so what we look for are key species that used to be in the area that can shape this new landscape in the modern context.”

To “bring back” aurochs, scientists have been back-breeding old lines of domestic cattle. Aurochs went extinct in the mid-1600s, so there are many accurate drawings of what the animals looked like, as well as physical remains. By taking the cattle that are most genetically similar to aurochs and breeding them for traits that are more like their ancestors, scientists are getting animals “that look like the original,” says Schepers.

Such projects could be sustainably supported by jobs in tourism and natural products (auroch leather anyone?), as well as through government protection, Schepers hopes.

Still, challenges remain. The populations of many animals being reintroduced were so devastated that not a lot of genetic diversity remains. Scientists are working hard to maximize what they have by careful pairings and management, but the animals still may prove to be susceptible to diseases and other problems of inbreeding.

And as predators like wolves and bears slowly return to the continent, clashes with people are likely to increase. At the same time, the fact that people are increasingly moving to cities has meant more land is opening up in the countryside, ripe for rewilding. That’s as long as the neighbors don’t object too much, as ranchers occasionally do around Yellowstone when wolves or bison stray onto their land in the U.S.

The ultimate goal of introducing bison and other animals is to “make wild nature a normal part of modern Europe,” says Schepers.

With only about one percent of the continent’s land currently in a state of wilderness, Rewilding Europe and other partners have their work cut out. The good news, they say, is that they don’t have to achieve pristine wilderness to be successful. Any step toward something more natural is better than the more degraded landscape that came before.

This article was first published by National Geographic on 23 Mar 2016. Lead Image: European bison have been reintroduced into the Netherlands. Photograph by Staffan Widstrand, Rewilding Europe.