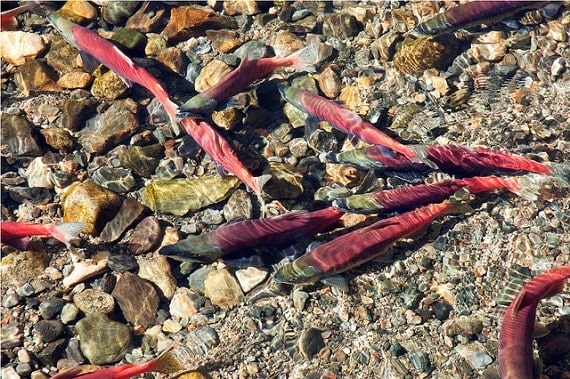 After we posted our blog, “The Washington Post is Wrong About Farmed Salmon,” we got a lot of questions about wild salmon feed ratio versus the feed ratio for farmed salmon. One commentator even suggested that because wild salmon eat at ratios higher than one to one, it might be better for the ocean if we switch to eating farmed salmon (instead of wild) because it would save more wild fish.

To be specific: Yes, wild salmon eat more than their weight in other wild fish. They are a voracious predator. No, this doesn’t change anything. You should still always choose wild salmon over farmed if you want to be a responsible seafood eater.

It’s simple. Farmed salmon is a commercial, essentially man-made product with no limits on its “population” other than the consumer demand for eating the stuff. Salmon farms can make as much salmon as they can sell. And, as we’ve already pointed out, all of this farmed salmon should really be viewed as the wild fish it takes to make it—that is jack mackerel, sardines and anchovies (in the case of Chilean salmon). Unfortunately, the natural limits on how much wild fish these farmed fish should eat are entirely broken. Farmed fish are aided by huge fishing fleets that search the entire ocean for fish to turn into fish meal. Those fleets have decimated entire populations of other wild fish in order to meet the demand for more farmed salmon fillets. You can think of farmed salmon as kind of ocean super-predator, with a limitless and uncontrolled appetite for wild fish.

Though they are voracious predators, wild salmon don’t throw entire ecosystems out of balance. Wild salmon are a crucial part of a wild system. Unlike fishing fleets that feed farmed salmon, they can’t transport themselves to other parts of the ocean in search of new prey. They eat what they can find and, in turn, are eaten by other creatures in the ocean. They swim thousands of miles to feed, mate, and reproduce. They have not, as far as science knows, decimated entire populations of other fish around the globe (as has happened to jack mackerel in Chile). And, they are not native to Chile.

Wild salmon also have inherent limits on their population. It’s why eating wild rather than farmed is better for the oceans. As long as we don’t overfish them, wild salmon help maintain a balance in ecosystem that evolved precisely because it works.

So, don’t fall for this red salmon, er, herring. Comparing the feed ratios of farmed salmon to wild salmon is like comparing apples to oranges, or jack mackerel to wild salmon.It doesn’t make sense. To see the full picture, you need to compare the effect of both animals on wild fisheries and oceans.

And when you do there is no contest: wild salmon are the more responsible choice. And despite the Washington Post’s tasting panel’s results, we also think they’re the tastier one, as well.

This article was written by Andy Sharpless for Oceana.org