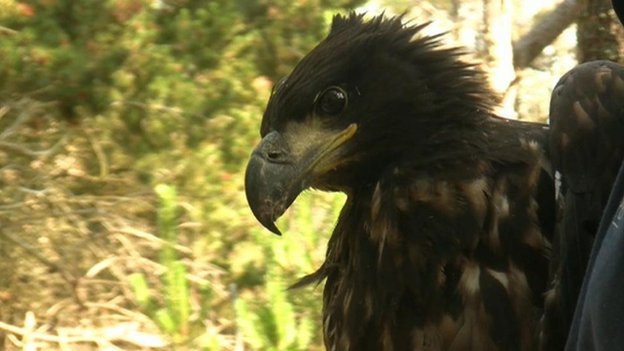 One of Britain’s leading wildlife experts has rejected calls for the number of white-tailed eagles in Scotland to be controlled. Prof Des Thompson, principal adviser on Biodiversity at Scottish Natural Heritage, has told BBC Scotland there is no reason why the white-tailed eagle population should not reach “several hundred breeding pairs”.

The calls for control measures have come from farmers and crofters, amid an increasingly-heated dispute about the impact the birds are having on sheep.

The birds, which are also known as sea eagles, were reintroduced to Scotland from Norway after centuries of persecution here. The return of the white-tailed eagle to Scotland’s skies is seen by conservationists as a success story.

But sheep farmers say they have deep concerns about the increasing numbers of the birds. There are about 80 breeding pairs on the west coast of Scotland and sea eagles have now begun breeding on the east coast.

The controversy centres on claims the eagles are killing live lambs in large numbers. Scientists say the birds are much more likely to feed on lambs which have already died on the hillside, and attacks on live lambs are comparatively rare.

Farmer Robert MacDonald, from Skye, denies that’s the case and is warning the issue could “sound the death knell” for sheep farming in the north west of Scotland.

He told BBC Scotland: “The scientists are not out there. They’re not seeing what the eagle is actually doing, so I don’t see how they can say that. They would say anything to support the continuing rise of the sea eagle.”

Scottish Natural Heritage says the population of white-tailed eagles is growing at between 8% and 10% a year.

Euan Warnock, of NFU Scotland, argues that underlines the need for some form of control on the size of the population, but has stopped short of calling for a cull.

He said: “I don’t think we are at that stage, but we might need to look at the possibility of relocating individual birds where they’re having a disproportionate impact on local farms.”

NFU Scotland wants to see its members compensated for their losses. A sea eagle management scheme, which provided support for farmers and crofters in the north west of Scotland, ended last year.

Mr Warnock said: “We want the management scheme to carry on in some form but we have to have a radical look at new options because it was in no way compensation to the farmers for the impact the birds are having on their farms.”

Scottish Natural Heritage has pledged to work with farmers and crofters. But Prof Thompson believes management measures other than population control represent the best way forward.

He said: “The population is still growing and we may eventually have several hundred breeding pairs of sea eagles.

“That shouldn’t be a concern. Scotland is a big country. There is plenty of space for them. Why on earth would we talk about controlling sea eagles?

“There are lots of good management measures we can put in place. We can look at improving livestock husbandry and ensuring that there’s ample prey for sea eagles.”

Meanwhile, RSPB Scotland has dismissed suggestions that sea eagles could be moved to other areas.

Spokesman James Reynolds said: “Sea eagles are mobile. They fly and will go where they wish. They will make sure they can set up home in habitats that can support their numbers.

“We can’t start moving them around because they will simply come back and fill the vacuum.”

This article was written by David Miller for BBC Scotland.