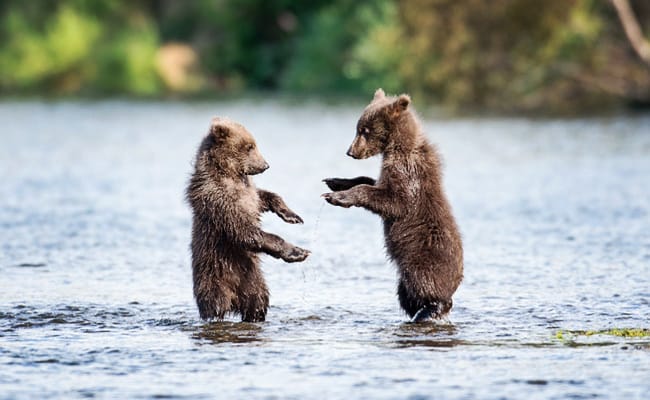 Conservationists are speaking out in opposition of a disturbing proposal that would reverse Obama-era regulations intended to protect wildlife in Alaska from some of the most egregious hunting practices around.

In 2015, the National Park Service (NPS) finalized a rule that amended its regulations for sport hunting and trapping in Alaska to prevent cruel killing methods from being used on millions of acres on public lands. A year later, the U.S. Fish and Wildlife Service (FWS) followed up with a similar rule that protected predators in the state from practices including killing bear cubs or mothers with cubs at den sites, using aircraft, bait, leghold traps and snares to kill brown and black bears, and killing wolves and coyotes during denning season.

These rules were implemented to make it clear that these hunting practices are inconsistent with congressional mandates that both agencies have to conserve wildlife, and they were widely supported by residents, along with dozens of state and national animal advocacy and conservation organizations who all want to see the Alaska’s wildlife protected from cruel, senseless, unethical and scientifically unjustifiable hunting practices.

Now, those protections could all be undone by the Trump administration. Last year the Department of the Interior directed the NPS to reconsider its regulations, and the agency just published a new proposed rule that would give power back to Alaska’s game officials, and let them decide whether to allow these practices, which they will.

If it’s finalized, vulnerable caribou could be shot from boats while they’re swimming, dogs could be used to hunt black bears, bear cubs could be killed with their mothers while they’re hibernating, dens would no longer provide a haven for families of wolves and coyotes who could be killed in them, and bears could once again be lured to bait piles of junk food and killed, while more could be targeted from aircraft and snowmobiles.

This would all be allowed on public lands, including national parks and preserves, despite the fact that thousands of people have already stood in opposition to these practices, and won.

According to the NPS, the proposed rule is intended to make federal and state regulations more consistent with each other, but there’s a good reason these prohibitions were put into place and opponents of this proposal are speaking out against undoing them.

“This new proposal ignores the years of careful consideration, taxpayer dollars and thousands of people who already spoke up in support of bears and wolves on national park land in Alaska. More than 70,000 Americans previously said ‘no’ to baiting bears with grease-soaked donuts in Denali. They said ‘no’ to sport hunters crawling into bears’ dens and using flashlights to wake and kill mother bears and their cubs on lands managed by the National Park Service. And, after 26 public meetings and an extensive public process, the Park Service too said ‘no’ on their behalf,” said Theresa Pierno, President and CEO of National Parks Conservation Association.

These predators aren’t just inherently valuable and an important part of the ecosystem, they’re also a major draw for tourists who want to enjoy opportunities to view wildlife.

While this proposed rule could have deadly, unjustifiable consequences for some of Alaska’s most iconic wildlife, there’s still a chance to stop it from becoming official.

Now, animal advocacy and conservation organizations are urging people to speak up on behalf of Alaska’s wildlife to ensure the state can’t move backward and again allow these barbaric practices. We have about two months to weigh in until the public comment period closes on July 23.

You can help protect Alaska’s wildlife by signing and sharing the petition opposing the National Park Service’s proposed rule.

You can also submit a comment directly at the Federal Register in support of keeping the current prohibitions on these hunting methods in place.