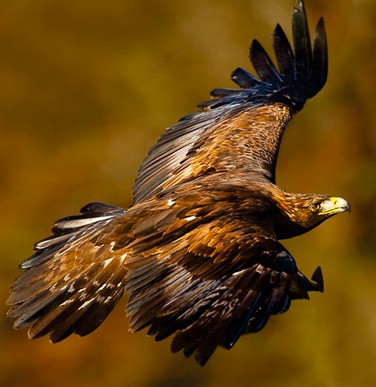 American Bird Conservancy (ABC), the nation’s leading bird conservation organization, today sent a letter to the U.S. Fish and Wildlife Service (FWS) voicing strong concerns about the first-ever application for a special permit that would allow Golden Eagles to be incidentally killed. The proposed “incidental take permit,” submitted under the Bald and Golden Eagle Protection Act, would allow Oregon’s West Butte Wind Project to kill, harm, or disturb up to three Golden Eagles over five years, as long as certain conservation measures were implemented.

ABC’s letter charges that the data upon which an FWS decision would be based are markedly deficient, and that the federal government is not meeting standards prescribed in its own regulations published less than three years ago. ABC also cites emails, obtained through a Freedom of Information Act request, between senior Department of Interior staff casting doubt on the whether the project could ever be safe for birds, including Golden Eagles.

“American Bird Conservancy is in favor of wind power so long as it is bird-smart. This includes permitting, which would allow FWS to advance good projects while preventing bad ones. It is vital that we get this first permit right since it will likely be used as a model for future similar permits. But more information is needed to determine the actual risk to Golden and Bald Eagles, and the permit should not be issued without that information. We’re already seeing significant Golden Eagle mortality issues emerge from another project that was thought to be low risk at Pine Tree Wind Farm in California where eight Golden Eagles have been killed in two years,” said Kelly Fuller, ABC’s Wind Campaign Coordinator.

Specifically, the project has failed to provide adequate data on the Golden Eagle population and Golden Eagle prey abundance in the area, and has not performed sufficient avian-use surveys. Additionally, ABC has raised concerns that Bald Eagles are also known to be very near the site, but the FWS environmental analysis does not give enough information to determine whether they are at risk, or what FWS would do if Bald Eagles were killed. The project developer has not applied for an incidental take permit for Bald Eagles, just for Golden Eagles.

“The developer did the right thing in applying for the permit instead of simply proceeding with development. Unfortunately, the draft Environmental Assessment for the proposed West Butte permit doesn’t offer enough information to show how much risk the project really poses to both Bald and Golden Eagles, and whether the proposed conservation measures in the permit could ultimately help them,” Fuller said.

“The data provided in the application are clearly insufficient to demonstrate that a resultant decline in eagle populations will not occur. This contradicts FWS’s own 2009 regulations designed to implement the Bald and Golden Eagle Protection Act,” Fuller said.

The take permit application was submitted by West Butte Wind Power LLC. FWS subsequently prepared a Draft Environmental Assessment on the proposal and allowed public comments through February 2. They subsequently extended the deadline until February 17 after ABC and other groups asked for more time to assess the nearly 600 pages of relevant documents.

The West Butte Wind Project, if built, would be a 104 MW project located on private land in Crook and Deschutes Counties, Oregon. Necessary infrastructure for the project, including power lines and an access road, would be located on public land administered by the U.S. Bureau of Land Management. The Secretary of the Interior approved a Right of Way permit for that infrastructure in 2011.

ABC supports bird-smart wind energy that is properly sited, constructed, and operated to minimize bird impacts, with appropriate compensatory mitigation for unavoidable losses. ABC leads a coalition of more than 60 groups promoting mandatory federal standards to protect birds, including Golden Eagles and their habitats, from wind energy development rather than the voluntary guidelines proposed by the federal government and backed by the wind industry.