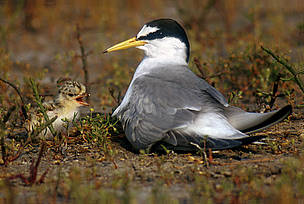 The declaration – signed during the Informal Ministerial Meeting within the Hungarians EU-Presidency – paves the way for creating the world’s first five-country protected area and, with an overall size of about 800,000 ha, Europe’s largest riverine protected area. “This landmark cross border agreement is a powerful demonstration of a shared green vision that builds on and reinforces regional cooperation and unity in Europe,” said Jim Leape, WWF International Director General.

The declaration was signed today by Mr Nikolaus Berlakovich, Mr Sándor Fazekas, Mr Oliver Dulić and Mr Roko Žarnić, the ministers responsible for environmental protection in Hungary, Serbia and Slovenia, and Mr Jasen Mesić, the minister of culture in Croatia. Given the global importance of this outstanding commitment in initiating the trans-boundary UNESCO Biosphere Reserve between five countries, WWF today presented the five ministers with the WWF “Wild Heart of Europe” award, handed over by Andreas Beckmann, Director of the WWF Danube-Carpathian Programme and Gábor Figeczky, CEO of WWF Hungary.

“It is not only a significant step forward in protecting the region’s natural treasures but serves as a striking example of how nature conservation can bring countries together,” said Andreas Beckmann. “WWF hopes the declaration signed today will accelerate the country’s efforts to fully establish this critical trans-boundary protected area within the next couple of years to protect this green belt in the heart of Europe,” Beckmann added. In 2009 Croatia and Hungary signed an agreement to protect their shared biodiversity hotspot along the Mura, Drava and Danube rivers. This agreement has served as a basis for the current five-country declaration.

With rare floodplain forests, river islands, gravel banks and oxbows, the new five-country protected area spans 700 kilometres of rivers and 800,000 hectares of unique natural and cultural landscapes. The area is home to the highest density in Europe of breeding pairs of white-tailed eagle and endangered species such as the little tern, black stork, otters, beavers and sturgeons. It is also an important stepping stone for more than 250,000 migratory waterfowls every year. “The five countries have agreed to protect an area which is one of the richest in Europe in terms of species diversity,” said Arno Mohl, Project Coordinator of the “Mura-Drava-Danube” Biosphere Reserve project at WWF Austria. “Such floodplain areas can only be topped by the tropical rainforests.”

The river ecosystem is also vital for the socio-economic well being of the trans-boundary region. It is a major source of good drinking water, natural flood protection, sustainable forestry, agriculture and fisheries. It also has an important role in promoting eco-tourism, awareness raising and environmental education in the region. “We trust that this agreement will end unsustainable river regulation and gravel and sand extraction projects which are still threatening this unique river ecosystem,” Arno Mohl said. WWF also hopes that no new hydropower dams will be planned for the area and the gravel excavations will not threaten river dynamics.

The new protected area was declared with the help of WWF, EuroNatur and local partner organisations such as Drava League, Green Action and DOPPS-Birdlife Slovenia. “Since the 1990’s EuroNatur has invested a great deal to foster regional cooperation to preserve the natural values of the rivers. We are very proud about the achievement of this joint commitment that will trigger transboundary regional development based on natural values of the riverine landscape”, said Martin Schneider-Jacoby from EuroNatur.

The WWF project “Protecting Europe’s lifeline – the creation of a Trans-Boundary Biosphere Reserve along the Danube, Drava and Mura rivers” is carried out with the support of the MAVA Foundation, Asamer Holding and The Coca Cola Company. For further information:
Arno Mohl, Project Coordinator, Mura-Drava-Danube Biosphere Reserve, WWF Austria +43 676 83 488 300 Download the management concept for the Biosphere Reserve has already been developed by WWF and EuroNatur.

This article was written and published by World Wildlife Fund Global.