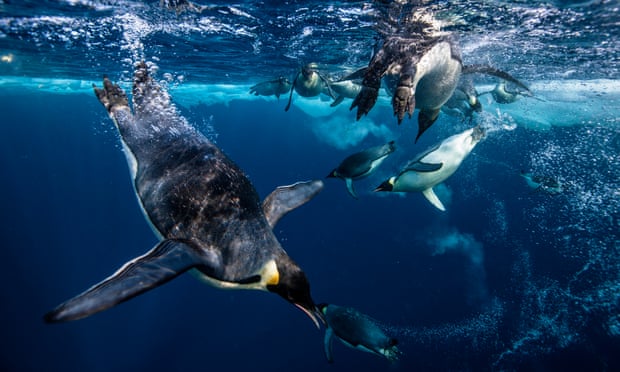 Scientists in Antarctica have recorded the world’s longest penguin dive, an astounding 32.2 minutes under the water; a full five minutes longer than the previous record.

Emperor penguins, which live only in Antartica, are the tallest and heaviest penguins in the world, and have the best diving ability. They can dive as much as 500 metres down in some of the world’s harshest and coldest seas.

The record dive emerged after 20 emperor penguins were tagged with satellite transmitters in 2013, to better understand their foraging and diving patterns.

The research was conducted by Marine ecologist Dr Kim Goetz from the New Zealand’s National Institute for Water and Atmospheric Research, Dr Gerald Kooyman from the Scripps Institution of Oceanography and Dr Brigitte McDonald from Moss Landing Marine Labratories. Their findings have been published in the Journal of Marine Ecology Progress Series.

Although Goetz and her team were aiming to study the behaviors of breeding penguins, they tagged the wrong birds, tracking 20 non-breeding birds that spent most of the next year hunting in the remote eastern Ross sea; usually a challenging environment for scientists to study animal behavior, due to its distance from human bases.

Goetz and her team discovered that emperor penguins travel and dive further than anyone thought possible; travelling distances between 273km and nearly 9,000km in the study period, and conducting dives that lasted between one and 32.2 minutes.

Before the team’s findings the longest recorded emperor penguin dive was 27.6 minutes, which is “impressive” and mysterious, said Goetz, given emperor penguins’ physiology suggest they should be capable of comfortably diving for periods up to eight minutes; after which they run out of oxygen and their anaerobic system kicks in, placing a significant strain on the body and requiring a longer recovery time.

“But if an animal is going deeper and expending itself and using all its oxygen to get down there, it is usually because it is worth it.”

Most of the fitted trackers stayed in place for more than six months, and more than 96,000 dives were recorded between March and the end of 2013.

Goetz said the next phase would require placing cameras on the birds to record exactly what they were doing under the ice – and what they were hunting for that was worth the effort.

“This study showed that animals go far further than we thought – this has a number of different implications for their survival … understanding their entire life cycle, especially when birds are not restrained by chick-rearing duties, is critical to predicting how emperor penguins might respond to environmental changes.”

This article was first published by The Guardian on 26 Apr 2018.