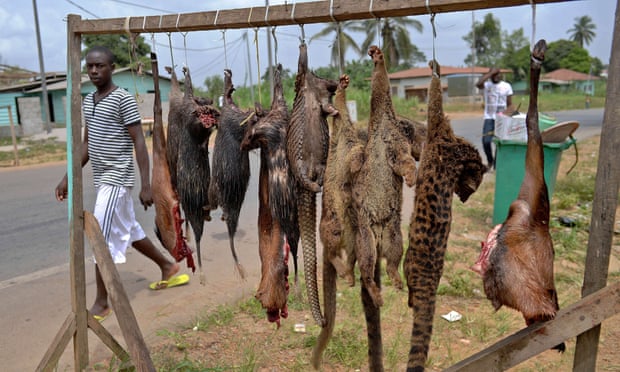 Hundreds of mammal species – from chimpanzees to hippos to bats – are being eaten into extinction by people, according to the first global assessment of the impact of human hunting.

Bushmeat has long been a traditional source of food for many rural people, but as roads have been driven into remote areas, large-scale commercial hunting is leaving forests and other habitats devoid of wildlife.

The scientists behind the new analysis warned that, without action, the wiping out of these species could lead to the collapse of the food security of hundreds of millions of people reliant on bushmeat for survival.

The work comes against the backdrop of the natural world undergoing the greatest mass extinction since a giant meteorite strike wiped out the dinosaurs 65m years ago, with species vanishing far more rapidly than the long term rate, driven by the destruction and invasion of wild areas by humans and their livestock and hunting.

The researchers, whose study is published in the journal Royal Society Open Science, used the International Union for Conservation of Nature’s (IUCN) red list to identify the endangered land mammals that are primarily at risk from hunting for food. They found 301 such species, representing 7% of all the land mammals assessed by IUCN and about a quarter of all endangered mammals. Other mammals are threatened by habitat loss or hunting for other reasons, such as elephants which are poached for their ivory.

The 301 species include 168 primates, such as the lowland gorilla and mandrill, 73 hoofed animals, such as the wild yak and bactrian camel, 27 bats, such as the golden-capped fruit bat and the black-bearded flying fox, and 12 carnivores, such as the clouded leopard and several bear species.

There are also 26 marsupials threatened by meat hunting, including the grizzled tree kangaroo, and 21 rodent species, such as the Sulawesi giant squirrel and the alpine woolly rat. All eight species of pangolins – scaly anteaters – are threatened and these species won top-level protection at the recent summit of the Convention on the International Trade in Endangered Species.

“There are a plenty of bad things affecting wildlife around the world and habitat loss and degradation are clearly at the forefront, but among the other things is the seemingly colossal impact of bushmeat hunting,” said Prof David Macdonald, at the University of Oxford and part of the international team that produced the research. “You might rejoice at having some habitat remaining, say a pristine forest, but if is hunted out to become an empty larder, it is a pyrrhic victory.”

He said: “The number of hunters involved has gone up, and the penetration of road networks into the remotest places is such that there is no refuge left. So it becomes commercially possible to make a trade out of something that was once just a rabbit for the pot. In places like Cameroon, where I have worked, you see flotillas of taxis early in the morning going out to very remote areas and being loaded up with the [bushmeat] catch and taken back to towns.”

The scale of the global bushmeat trade is difficult to measure but, in 2011, the Center for International Forestry Research estimated 6m tonnes of animals were taken each year. Another estimate indicates 89,000 tonnes of meat, worth $200m, is taken every year from the Brazilian Amazon. The meat is also smuggled abroad, with 260 tonnes of wild meat per year estimated to be hidden in personal baggage at just one European airport, Paris Charles de Gaulle.

Bushmeat is often caught using long lines of snares, which trap animals indiscriminately. Macdonald, who works with the lions in Hwange park in Zimbabwe where Cecil the lion lived, has seen lions killed by snares set for game species.

The extinction of the threatened mammals would also irrevocably upset the balance of many ecosystems. For example, they include predators that keep rodents in check, species vital for dispersing seeds and others such as bats that pollinate flowers.

“With this [hunting] trend, the loss of mammal populations thus affects the livelihoods and food security for hundreds of millions of rural people across the globe,” the scientists warned.

Macdonald said: “You have got to distinguish between those people who have no choice but to eat bushmeat, and what is to be done for them, and people now living in towns who have a nostalgic memory for the time when they lived on bushmeat, but no longer need to, so it is a luxury.”

This article was first published by The Guardian on 19 Oct 2016.

There are to many people on the Planet, and should be regulated, one way or another!