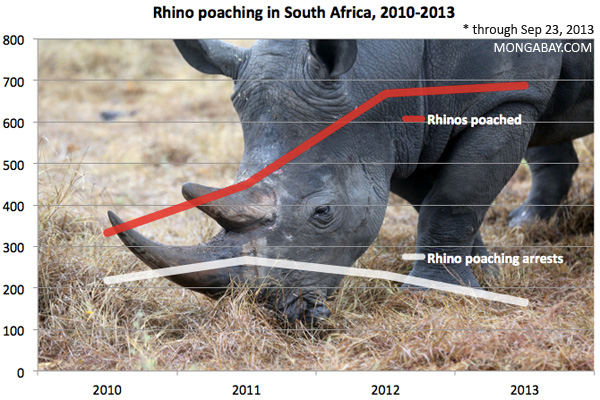 At least 688 rhinos have been poached in South Africa this year, surpassing last year’s record of 668 with more than three months remaining in 2013, reports the country’s top environmental official. In a speech given September 21 — the day before World Rhino Day — Minister of Water and Environmental Affairs Edna Molewa presented statistics showing a sharp rise in rhino poaching over the past four years.

Her data also revealed a decline in the number of rhino-related arrests, suggesting increased sophistication of the illegal trade, where horns from source countries in Africa and Asia is generally trafficked to urban markets in Vietnam and China, where rhino horn is believe to cure a range of ailments and is also viewed as a status symbol. Rhino poaching has surged in recent years due to rising demand from a growing middle class in East Asia.

Efforts to combat the trade has largely fallen flat. Now some South African officials are pushing to legalize the sale of rhino horn stockpiles, arguing that flooding the market would collapse prices, thereby deterring poaching. But opponents say legalization risks creating new markets for rhino ivory, potentially hastening the demise of the world’s five remaining rhino species, all of which are considered endangered.