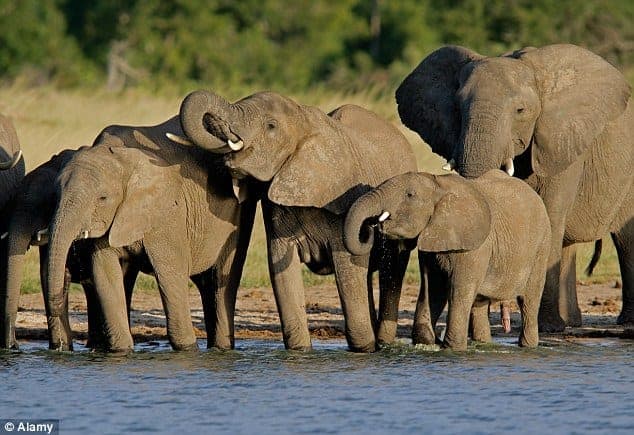 Tourists said they heard the families scattered by gunshots. They made for easy targets: great, grey figures stark against the golden grass. As the animals began to stampede, their terrified babies, unable to keep up, were roped together and taken away. Their capture tore apart families that in the wild could be separated only by death.

Within weeks, one of the elephants had died and its meat distributed for food, according to conservationists, who sent a team to investigate reports of the round-up late last year. They say the remaining 35 calves, plus an additional one to replace the deceased, are being held captive in a boma, along with several other animals, close to the main camp of Hwange National Park.

This week, Zimbabwean authorities confirmed to reporters that 62 baby elephants, including the 36 rounded up, will be exported to the United Arab Emirates, France and China. The government has remained mute about when the animals will be exported, and the identity of the buyers.

Defending the plan last week, tourism minister Walter Mzembi said the sale would be beneficial because it would help the country address an “over-population” of elephants.

“Our habitat is not designed to carry too many elephants that are in its environment. We have an over-population of elephants,” he said.

In December, Geoffreys Matipano director for conservation at the Zimbabwe Parks and Wildlife Authorities, told Bloomberg the elephants would be sold for up to $60,000 (£39, 400) each, which would help fund running costs at Hwange.

Conservationists fear that if even the animals survive their journeys, it may be to live out their lives in solitary confinement as show animals or zoo attractions.

“You can’t take these animals out of Africa and send them to these inhumane areas where they’ve got no good track records,” said Johnny Rodrigues, who heads up the Zimbabwe Conservation Task Force (ZTCF), referring to mainly to China and UAE, where animal cruelty has been reported in zoos and circuses across the country.

He has launched a petition to stop the sale from proceeding, which has gathered more than 27,000 signatures. “It’s cruel what they are doing,” he added.

“We are sure there are 25,000 elephants in the Hwange elephant Park,” Colin Gillies, of Wildlife Environment Zimbabwe, told the Sunday Argus, “while the national parks believe there are 40,000.”

Exporting elephants is not illegal in Zimbabwe. Under the CITES agreement to protect wildlife, trade in elephants in Zimbabwe (along with South Africa and Botswana) is permissible, as long as it is properly regulated. The treaty stipulates that all species should be categorised according to the size and robustness of the population, and trade limited accordingly.

In 1997, CITES members voted to downgrade the Zimbabwean elephant from Appendix I (a total ban on trade) to Appendix II, in order to facilitate a once-off legal sale of stockpiled ivory. Zimbabwe, as well as Botswana, Namibia and South Africa, argued that the reclassification was appropriate given healthy current elephant populations, despite the ever-present risk of a new upsurge in poaching. In 2014 the US Fish and Wildlife Service banned imports of elephant trophies from Zimbabwe citing concerns over conservation of elephants there.

In 2013 alone, Africa lost over 20,000 elephants to poaching. Even where numbers still buoy well above critical levels, experience has shown that poaching can cause devastating population declines over short periods. According to a recent study published last year in Proceedings of the National Academy of Sciences, the elephant population of central Africa, hardest-hit by poaching, plummeted by 64% in a single decade.

ZCTF says it is campaigning to have Zimbabwe’s elephants reclassified under Appendix I, and an unconditional ban not only on trade of ivory but also live elephants.

Though CITES has come under criticism for its lack of policing power, evidence suggests that Appendix I categorisation does have an impact on conservation. Indeed, the classification of the African elephant to Appendix I in a 1989 CITES meeting was followed by such a significant and sustained recovery in elephant numbers that, until very recently, elephant conservation was hailed as one of CITES’ greatest successes.

Currently, elephant trade is still limited, in theory, to destinations that are ‘acceptable and appropriate’. However, interpretation and fulfilment of this criteria is left to the discretion of the trading parties. In addition to clarifying these requirements, proposals for improving CITES’ regulatory mechanisms include the electronic export permits, to help track elephants once they reach their destinations.

ZCTF is hopeful that it may be able to stop the planned export. In 2012, it managed to get five Zimbabwean elephants marked for overseas sale returned to the wild. Of the four others that were sent to China, one remains alive today, the organisation claims.

This article was first published by The Guardian on 15 Jan 2015.